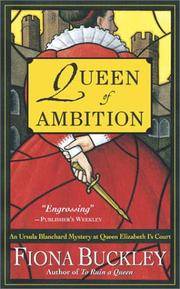 New York U. S. A.: Pocket Star Books. As New 2002. Paperback. Marfree, collectable Fine 1st paperbk Ed, as shown; no names, not marked-in, underscored, clearance or discard. Mails from NYC usually within 12 hours. ; Ursula Blanchard Historical Mysteries Series; 6.8 x 4.2 x 1 inches; 384 pages; \nFrom Publishers Weekly Ursula Blanchard, lady-in-waiting and espionage agent to Queen Elizabeth I, shows her usual flare in dealing with murder and intrigue in Buckley's fifth engrossing Elizabethan mystery (after 2000's To Ruin a Queen) . In the early summer of 1564, Ursula is at Withysham, her country manor house, where she and her eight-year-old daughter are waiting for the plague to end in France so that they may join her husband at their home in the Loire Valley. Meanwhile, Queen Elizabeth is preparing a Royal Progress to Cambridge University. Ordered to court earlier than expected, Ursula learns that the queen's Secretary of State, Sir William Cecil, is fearful about a student play to be presented to the queen just after she enters the town and greets the public. Ursula and her good friend, Rob Henderson, are sent ahead to investigate. Going undercover in her housekeeper's dress, Ursula takes a job at the pie shop frequented by Cambridge students and across the street from where the play is to be performed. A student death, complicated ciphers and a runaway wife make for a suspenseful story. As in previous novels in the series, the author expertly blends historical fact and fiction. Although the conclusion may not satisfy some readers and minor characters are merely names, the challenging plot and winning heroine will satisfy existing historical fans and should attract new ones. (Jan. 3) Anand. Copyright 2001 Cahners Business Information, Inc. --This text refers to an out of print or unavailable edition of this title. From Library Journal In her fifth outing (after To Ruin a Queen) , Ursula Blanchard investigates a young man's death, convinced that it is connected to a seemingly innocent student prank that could endanger Queen Elizabeth. Good historical background and affecting personal detail make this another winner. Copyright 2002 Reed Business Information, Inc. --This text refers to an out of print or unavailable edition of this title. .