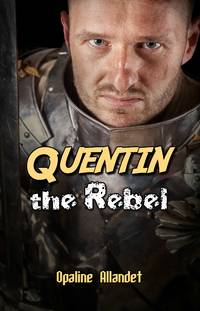 This narrative, which is entirely fictional, takes place in a real historical context: that of the Holy Roman Empire, at the beginning of the thirteenth century. At that time, the empire was torn by incessant civil wars, which were fought between two rival clans over the right to rule.

Godefroy of Lanicey, known as "Godefroy the Cruel," remarried, taking for his bride Isadora of Willeim. She gave birth to Guillaume, his second son. Godefroy's son, Quentin—who had left his father three years earlier, because they both loved the same woman, who was then murdered—returned to the Lanicey fortress in 1201. He waged war alongside Othon of Brunswick, while his father supported the rival clan. But his character was beginning to assert himself, and he was behaving more and more like his father. He became powerful, full of himself, and terribly resentful.

Following two prior adventures about the fortress's inhabitants—which pertain to Godefroy and his son—Quentin embarks for the Fourth Crusade, in the Middle East. This time, the Crusaders are victorious. Quentin returns to his country two years later, bringing with him his new, young bride.

But Godefroy was furious; he refused the marriage, which he had not decided, and threatens to disinherit Quentin, in favor of Guillaume instead. Father and son face each other down once more. Quentin rebels and leaves the fortress, then decides to take revenge.... Read the story to discover what his revenge will be like.

After completing a degree in social work in Dijon, the author worked as a social worker at the Centre hospitalier universitaire de Besançon until 2003. It was at this time that she stopped working so that she could write; literature is her greatest passion. She has written four collections of poetry, published by Éditions Dédicaces, as well as eight novels, of which the most recent, Godefroy the Cruel, was published in 2014. Quentin the Rebel is its sequel.

Seller rating:
This seller has earned a 5 of 5 Stars rating from Biblio customers.
Biblio.com member since 2009
Dorval, Quebec
Ask Seller a Question

New
A new book is a book previously not circulated to a buyer. Although a new book is typically free of any faults or defects, "new"... [More]
leaves
Very generally, "leaves" refers to the pages of a book, as in the common phrase, "loose-leaf pages." A leaf is a single sheet... [More]