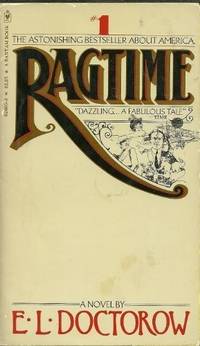 Ragtime, E. L. Doctorow’s best-known novel, highlights the American melting pot and how the nation came to be what it is today. Set in the early 1900s, the story namely focuses on a wealthy family living in New Rochelle, New York, simply named Father, Mother, Mother's Younger Brother, Grandfather, and the boy. The boy, Father and Mother's young son, perhaps narrates the novel from a reminiscent adult perspective, but the omniscient narrator is never decidedly identified. The family’s turn-of-the-century journey of adaption addresses the tensions between reacting to the evolution of the era and executing revolution. Yet Ragtime is far more than the family’s narrative. In a beautiful execution of historical fiction, the novel weaves together biographical subplots of prominent figures of the day, including J.P. Morgan, Harry Houdini, Henry Ford, Sigmund Freud, and Emma Goldman. The result: Ragtime focuses not on just the nameless or the famous, but how the two groups create history together. Written when Vietnam was drawing to a close, Ragtime addresses issues that were affecting America at the time—from the abuse of power to racism to using sex to sell just about anything—but it also includes classic and enduring themes of morality, repression and injustice, change, and time. Ragtime was nominated for the Nebula Award for Best Novel and won the National Book Critics Circle Award for fiction in 1975. It also won the American Academy and Institute of Arts and Letters Award the following year. The novel was adapted for a 1981 movie and a 1998 Tony award-winning Broadway musical. Ragtime is included in TIME’s “100 Best Novels” (since 1923) and ranked 86th on Modern Library’s “100 Best” English-language novels of the 20th century.

Mass Market
Mass market paperback books, or MMPBs, are printed for large audiences cheaply.  This means that they are smaller, usually...[more]
acceptable
A non-traditional book condition description that generally refers to a book in readable condition, although no standard exists...[more]
reading copy
Indicates a book that is perfectly serviceable for reading. It may have a defect or damage. As such, reading copy is not...[more]