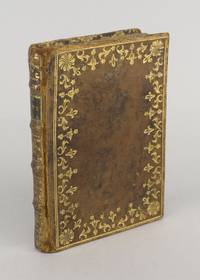 [Basel: Johann Amerbach], 1492. FIRST EDITION. 145 x 100 mm. (5 3/4 x 4"). [60] leaves. Single column, 27 lines of text (including headline) in gothic type. Pretty 18th century marbled calf, covers with double gilt-rule border enclosing frame of floral tools, raised bands, spine gilt in compartments with volute centerpiece and curling cornerpieces, black morocco label, marbled endpapers, all edges gilt. Woodcut frontispiece of Adam and Eve, one four-line maiblumen initial with marginal extension the length of the page, hand-painted red and blue paragraph marks and initials. Front pastedown with the bookplate of Bibliotheca Philosophica Hermetica; front free endpaper with 19th century bibliographical note; a few marginal annotations in ink. Goff G-171; BMC III, 755. Joints and extremities a bit rubbed, boards tending to splay just slightly, but the binding solid and the gilt still glistening; one leaf with short repaired marginal tear, small (ink?) stains to a couple of margins, isolated corner creases, otherwise a fine copy, quite clean, fresh, and bright internally. Beginning with a charming full-page woodcut of Adam and Eve in the garden partaking of the tree of knowledge, and featuring a prominent maiblumen initial, this is the first appearance of the inaugural treatise by Gerard Zerbolt of Zütphen, described by Post (in "The Modern Devotion") as "the most fertile and the most successful writer the Brothers [of the Common Life] ever produced." Zerbolt (1367-98) was an early member of the "Devotio Moderna" and served as librarian to the Brethren of the Common Life in Deventer. Despite his lack of university training, he "was remarkable for his absorption in the sacred sciences and his utter oblivion of all matters of merely earthly interest." (Cath. Ency.) Here, Zerbolt outlines how one can redeem the soul from its fallen state, moving to higher and higher levels through "self knowledge, repentance, combat of sin, mortification, the practice of humility and obedience." (Post) The "Devotio Moderna" helped pave the way for the religious reform movements of the 15th and 16th centuries, in particular with its emphasis on the importance of every person developing a personal relationship with God, as Zerbolt details here. According to Pollard, our printer Amerbach (1430-1513) issued his first book from a Basel establishment in 1478, and in his career printed about 100 incunabula, all in Latin and mostly works on theology or Bibles. He was the first printer in his city to use roman type. He also used several fonts that are nearly identical to those of Anton Koberger of Nuremberg, for whom he likely worked at some point in his career. Amerbach printed other works related to the "Devotio Moderna," including Thomas à Kempis' "Meditationes" and Zerbolt's "De Spiritualibus Ascensionibus," of which he presented 14 copies each to the Basel Charterhouse in 1488/89. This book rarely appears for sale and has not been seen at auction since 1975.

raised band(s)
Raised bands refer to the ridges that protrude slightly from the spine on leather bound books.  The bands are created...[more]
morocco
Morocco is a style of leather book binding that is usually made with goatskin, as it is durable and easy to dye. (see also...[more]
bookplate
Highly sought after by some collectors, a book plate is an inscribed or decorative device that identifies the owner, or former...[more]
calf
Calf or calf hide is a common form of leather binding.  Calf binding is naturally a light brown but there are ways to treat...[more]
edges
The collective of the top, fore and bottom edges of the text block of the book, being that part of the edges of the pages of a...[more]
First Edition
In book collecting, the first edition is the earliest published form of a book. A book may have more than one first edition in...[more]
gilt
The decorative application of gold or gold coloring to a portion of a book on the spine, edges of the text block, or an inlay in...[more]
Incunabula
Incunabula (incunable or incunabulum) refers to a book printed before 1501 - a pamphlet, a book or document that was not...[more]
leaves
Very generally, "leaves" refers to the pages of a book, as in the common phrase, "loose-leaf pages." A leaf is a single sheet...[more]
fine
A book in fine condition exhibits no flaws. A fine condition book closely approaches As New condition, but may lack the...[more]