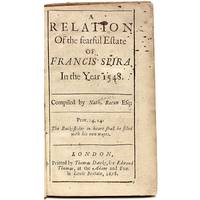 London: by Thomas Dawks for Edward Thomas, 1678, 1678. 1 vol., (viii)79pp., 5-5/8" x 3-3/8", bound in contemporary full speckled calf, head and foot of spine rubbed with loss, worming to rear cover, internally clean and bright. Among English Puritans, the most common and the most feared of Satan's temptations was the temptation to despair, the loss of hope in one's own salvation. Perhaps the most widely-known example of despair in the sixteenth and seventeenth century was the case of an Italian lawyer Francis Spira. In 1548, Spira converted to Lutheranism and began to spread the Lutheran message to others. Under pressure from the Catholic Church, however, he renounced his Protestant faith. He then became convinced that he was a reprobate, destined for hell. The story of Spira spread throughout Europe, surfacing in sermons and treatises dealing with despair. In England, an account of Spira's case by a first-hand witness, Matteo Gribalde, appeared in 1550. The most influential English account of Spira, however, was written by Nathaniel Bacon in 1638. Bacon's Fearefull Estate of Francis Spira, based on the original Latin records, became an instant best-seller and was reissued ten times in England and eight times in the American colonies in the seventeenth and eighteenth centuries. For anti-Puritans, Spira's case exemplified the dangers of the Calvinist teachings of predestination and human corruption. Puritans, however, empathized with Spira, seeing Spira's condition as simply an extreme example of the experience of all godly Christians. Wing B363

Most books shipped within 24 hours or next business day. 5 day return policy.

Seller rating:
This seller has earned a 4 of 5 Stars rating from Biblio customers.
Biblio.com member since 2004
Somerville, New Jersey
Ask Seller a Question

Established in 1985. Member ABAA and PBFA

calf
Calf or calf hide is a common form of leather binding. Calf binding is naturally a light brown but there are ways to treat the... [More]
spine
The outer portion of a book which covers the actual binding. The spine usually faces outward when a book is placed on a shelf.... [More]