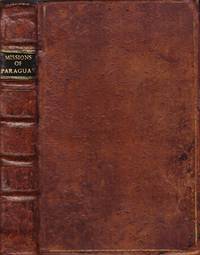 A Relation of the Missions of Paraguay. Wrote originally in Italian, by Mr. Muratori, and now done into English from the French translation

A Relation of the Missions of Paraguay. Wrote originally in Italian, by Mr. Muratori, and now done into English from the French translation

First English edition. Printed for J. Marmaduke in Long-Acre. London. 1759. Small 8vo. xvi, 294, [2]pp. Contemporary full calf, spine in six compartments with recent leather label. Head of spine worn. Joints cracked, exhibiting wear. Text toned, some browning to edges,with a little spotting, but generally crisp and clean. Some copies of the first English edition include the map from the French edition, some do not, and this copy still in an early binding shows no evidence of ever having included the map.

A most important work on Paraguay, "composed in great part from documents written by various Jesuit missionaries and travellers, furnished to Muratori by Father Gaetan Cattanio (1696-1733), a missionary of the brotherhood of Jesus, in Paraguay. His letters, published as an appendix to this work, are exceedingly interesting in affording descriptions of the Indians of Paraguay at this early day. The historian is said also to have derived no small portion of his work from the communications of Santo Bueno, Viceroy of Peru." Field, Thomas. An essay towards an Indian bibliography. 1107.

inscribed
When a book is described as being inscribed, it indicates that a short note written by the author or a previous owner has...[more]
bookplate
Highly sought after by some collectors, a book plate is an inscribed or decorative device that identifies the owner, or former...[more]
crisp
A term often used to indicate a book's new-like condition. Indicates that the hinges are not loosened. A book described as crisp...[more]
calf
Calf or calf hide is a common form of leather binding.  Calf binding is naturally a light brown but there are ways to treat...[more]
spine
The outer portion of a book which covers the actual binding. The spine usually faces outward when a book is placed on a shelf....[more]
cracked
In reference to a hinge or a book's binding, means that the glue which holds the opposing leaves has allowed them to separate,...[more]
G
Good describes the average used and worn book that has all pages or leaves present. Any defects must be noted. (as defined...[more]
edges
The collective of the top, fore and bottom edges of the text block of the book, being that part of the edges of the pages of a...[more]