Home The Lawbook Exchange Ltd Reports of Cases Adjudg'd in the Court of King's Bench, With Some.. 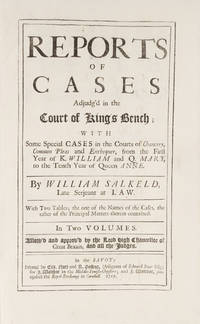 Reports of Cases Adjudg'd in the Court of King's Bench, With Some..

Reports of Cases Adjudg'd in the Court of King's Bench, With Some..

1717. 2 vols. London, 1717.. 2 vols. London, 1717. "Their General Accuracy, I Believe, Has not Been Questioned" Salkeld, William [1671-1715]. Reporter. Reports of Cases Adjudg'd in the Court of King's Bench; With Some Special Cases in the Courts of Chancery, Common Pleas and Exchequer, from the First Year of K. William and Q. Mary, To the Tenth Year of Queen Anne. With Two Tables; The One of the Names of the Cases, The Other of the Principal Matters Therein Contained. Allow'd and Approv'd by the Lord High Chancellor of Great Britain, And All the Judges. [London]: Printed by Eliz. Nutt and R. Gosling, 1717. 2 volumes. [16], 410, [2]; [14], 411-793, [111] pp. Complete. Includes two-page publisher advertisement. Folio (12-3/4" x 8"). Contemporary calf, glit rules to boards, raised bands, gilt ornaments, lettering piece, and small early paper shelf labels to spine, blind tooling to board edges. Light rubbing and few shallow scuffs to boards, moderate rubbing to extremities, corners bumped and somewhat worn, front hinge of Volume I cracked, armorial bookplates of the Earls of Macclesfield to front pastedowns, small embossed Macclesfield crest to preliminaries. Light to moderate toning, browning and light foxing in a few places. $450. * First edition. Covers the period from 1689-1712. "The first two volumes of Salkfeld were published under the supervision of Lord Hardwicke, and their general accuracy, I believe, has not been questioned" (Wallace). Bibliographically distinct, a third volume was added to this set in 1724. Our copy of this title belonged to the Earls of Macclesfield. Housed in Shirbirn Castle, near Watlington, Oxfordshire, it was one of the finest private libraries in Great Britain. Wallace, The Reporters 399-340. English Short-Title Catalogue T97358.

hinge
The portion of the book closest to the spine that allows the book to be opened and closed.
A.N.
The book is pristine and free of any defects, in the same condition as ... [More]
cracked
In reference to a hinge or a book's binding, means that the glue which holds the opposing leaves has allowed them to separate,... [More]
calf
Calf or calf hide is a common form of leather binding.  Calf binding is naturally a light brown but there are ways to treat... [More]
rubbing
Abrasion or wear to the surface. Usually used in reference to a book's boards or dust-jacket.
edges
The collective of the top, fore and bottom edges of the text block of the book, being that part of the edges of the pages of a... [More]
spine
The outer portion of a book which covers the actual binding. The spine usually faces outward when a book is placed on a shelf.... [More]
First Edition
In book collecting, the first edition is the earliest published form of a book. A book may have more than one first edition in... [More]
folio
A folio usually indicates a large book size of 15" in height or larger when used in the context of a book description.... [More]
raised band(s)
Raised bands refer to the ridges that protrude slightly from the spine on leather bound books.  The bands are created... [More]