Home The Lawbook Exchange Ltd Reports of Cases Adjudged in the Court of King's Bench, With Some.. 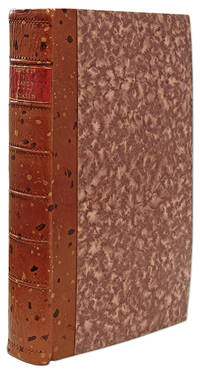 1773. Their General Accuracy, I Believe, Has not Been Questioned" Salkeld, William [1671-1715]. Reports of Cases Adjudged in the Court of King's Bench: With Some Special Cases in the Courts of Chancery, Common Pleas, and Exchequer, Alphabetically Digested Under Proper Heads; From the First Year of K. William and Q. Mary, To the Tenth Year of Queen Anne. With Two Tables; One of the Names of the Cases, The Other of the Principal Matters Therein Contained. Allowed and Approved of by the Lord High Chancellor of Great Britain, And All of the Judges. Being the Most Useful Collection of Cases for Justices of the Peace, And Also for Barristers, Students, And All Practisers of the Law. With Several Hundred References to Lord Raymond and Other Reporters Since His Time, Added (to Those by Knightly D'Anvers, Esquire, In the Former Edition) by George Wilson, Serjeant at Law. London: Printed by W. Strahan and M. Woodfall, 1773. Three volumes in one, second and third volumes preceded by divisional title pages. (Main title page states, "In One Volume Complete"). Unpaginated. Folio (14" x 9"). Recent period-style speckled calf over marbled boards, lettering piece, raised bands and blind ornaments to spine, endpapers renewed. Light toning to text, light edgewear to preliminaries, light soiling to title page, which has a neat early repair near lower inside corner, brief early annotations and underlining in a few places. $250. * Fifth edition. Covers the period from 1689-1712. A standard set of reports in Great Britain and the American colonies. "The first two volumes of Salkfeld were published under the supervision of Lord Hardwicke, and their general accuracy, I believe, has not been questioned" (Wallace). The annotations in our copy are references to other reporters and statutes. Wallace, The Reporters 399-340. English Short-Title Catalogue T108112.

A.N.
The book is pristine and free of any defects, in the same condition as ... [More]
folio
A folio usually indicates a large book size of 15" in height or larger when used in the context of a book description.... [More]
title page
A page at the front of a book which may contain the title of the book, any subtitles, the authors, contributors, editors, the... [More]
raised band(s)
Raised bands refer to the ridges that protrude slightly from the spine on leather bound books.  The bands are created... [More]
Marbled boards
... [More]
spine
The outer portion of a book which covers the actual binding. The spine usually faces outward when a book is placed on a shelf.... [More]
calf
Calf or calf hide is a common form of leather binding.  Calf binding is naturally a light brown but there are ways to treat... [More]