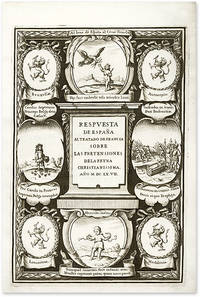 1667. Pictorial title page. Pictorial title page. The Legal Arguments that Led to the War of Devolution [Ramos Del Manzano, Francisco (1604-1683)]. Respuesta de Espana al Tratado de Francia Sobre las Pretensiones de la Reyna Christianissima Ano M.DC.LX.VII. [Antwerp or Madrid]: N.p., 1667. [x], 285 fols. Copperplate pictorial title page. Folio (12" x 8"). Contemporary vellum, gilt frames to boards, lettering piece and gilt ornaments to spine. Some rubbing and soiling, chipping to spine along front joint, chipping to edges of lettering piece, boards slightly bowed. Minor worming to front hinge, interior otherwise fresh. Ex-library. Small embossed stamp to title page and seven additional leaves at rear. A handsome copy. $2,000. * This appears to be the only edition of a set of legal arguments refuting France's attempts to lay claim to portions of the Spanish Netherlands. "Louis's claims to the Spanish Netherlands [in 1667] were tenuous. His wife, Maria Theresa, the daughter of Philip IV, had renounced her rights of a Spanish inheritance in return for a large dowry at the time of her marriage. The dowry had yet to be paid, however. When Philip died in 1665, Louis' lawyers justified Louis's possible claims by arguing that, while Spanish laws of succession meant the throne of Philip IV would pass to his son Charles II, ancient laws of Duchy of Brabant ruled that the Spanish Netherlands could 'devolve' to Philip's daughter from his first marriage, Louis's wife." (Wikipedia). Spain's refusal to acquiesce to Louis's demands led to the War of Devolution (1667-68). Francisco Ramos del Manzano was a lawyer, an eminent professor of law at the University of Salamanca and archdeacon of Malaga. He was a lawyer in the Council of Castile during reign of Felipe IV and was an instructor to Carlos II. The New Catholic Encyclopedia says he was "among the illustrious writers of treatises in the 16th and 17th century" and that he enjoyed "high prestige in the most distinguished circles of Europe." Peeters-Fontainas suggests this book was printed in Brussels while Palau says Antwerp. The copies listed on OCLC suggest Madrid. 4 copies located in the United States: UC Berkeley, UC Bancroft Library, Ransom Library and the Newberry Library. New Catholic Encyclopedia VIII 551. Palau, Manual del Librero Hispanoamericano 247905. Peeters-Fontainas, Bibliographie des Impressions Espagn.

spine
The outer portion of a book which covers the actual binding. The spine usually faces outward when a book is placed on a shelf.... [More]
rubbing
Abrasion or wear to the surface. Usually used in reference to a book's boards or dust-jacket.
edges
The collective of the top, fore and bottom edges of the text block of the book, being that part of the edges of the pages of a... [More]
New
A new book is a book previously not circulated to a buyer. Although a new book is typically free of any faults or defects,... [More]
gilt
The decorative application of gold or gold coloring to a portion of a book on the spine, edges of the text block, or an inlay in... [More]
folio
A folio usually indicates a large book size of 15" in height or larger when used in the context of a book description.... [More]
vellum
Vellum is a sheet of specialty prepared skin of lamb, calf, or goat kid used for binding a book or for printing and writing. ... [More]
leaves
Very generally, "leaves" refers to the pages of a book, as in the common phrase, "loose-leaf pages." A leaf is a single sheet... [More]
chipping
A defect in which small pieces are missing from the edges; fraying or small pieces of paper missing the edge of a paperback, or... [More]
title page
A page at the front of a book which may contain the title of the book, any subtitles, the authors, contributors, editors, the... [More]
hinge
The portion of the book closest to the spine that allows the book to be opened and closed.