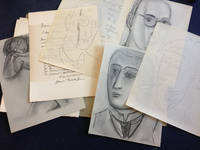 Art magazine published in Monaco and directed by Philippe Fontana. For this edition only the first and second number were published.

Hommage 1: Monaco, December 1943. First number of Hommage magazine, Folio in original grey folder wrapper. The collection containing: one poem by Pierre Emmanuel in fac-simile illustrated by Leon Zack in sepia, and the following prints: Etude by Bonnard, Symphonie by Dufy in double page, two nudes by Maillol, of which one in double page, two portraits by Matisse, and a satire by Picasso in double page.

Hommage 2: Dessins de Matisse Monaco, Juin 1944. Poems de Paul Eluard, foreword by Andre Rouveyre. Folio in original grey folder wrapper. The collection containing: 3 poems in fac-simile by Eluard preceded by an original lithograph by Leonor Fini on the frontispiece, an original photograph by Brassai of Matisse at work, introductory text by Rouveyre, 10 prints reproducing the original drawings by Matisse for this edition, complete of two blueprints with explanations for two portraits, followed by a letter in fac -simile by Matisse with the list of the drawings. Limited and numbered edition of 1050 copies.

All items are offered subject to prior sale. Price and availability information is subject to change without notice. Payments must always be made in advance. North American institutions can be billed. We accept PayPal and the following credit cards: VISA, Mastercard for orders under $1000, with fee of 3.5%, and fee of 4.5% for international transaction. We also accept: Bank transfer, Bank cashier's checks (USA only), and checks (USA only) as payment. In the cases of Bank checks, checks and Bank transfer being utilized in making payment, please understand the the item(s) will ship only after payment is cleared as "Funds collected" by our Bank (7-10 business days). Shipping cost will be charged at cost and the buyer will be notified of the exact amount. Items are usually shipped with FedEx insured the next business day after receipt of payment. We can send the items the same day by FedEx delivery overnight or 2nd day. Non-US orders are usually by USPS express mail if under $650.00 of value, or by FedEx if the value is higher. All orders should be insured, as we will not be financially responsible for loss. Virginia State residents must pay a sales tax of 6.00%. Virginia Dealers must submit a copy of the Certificate of Registration with a valid resale number. Title to any goods does not transfer from the seller until payment has been received in full. Any contract arising from this website is made under U.S. law.

The invoices that are not paid within seven (7) days will be void.

Seller rating:
This seller has earned a 5 of 5 Stars rating from Biblio customers.
Biblio.com member since: 2005
RESTON, Virginia
Ask Seller a Question

Marninart Rare Art Books is an antiquarian library specializes in deluxe edition of livres d'artistes by; Chagall, Matisse, Picasso, and Impressionists; art journal such as: Verve, Derriere le Miroir, XXe siecle, are also part of our collection. Marninart is members of ABAA and ILAB. Visi our website: www.marninart.net

folio
A folio usually indicates a large book size of 15" in height or larger when used in the context of a book description....[more]