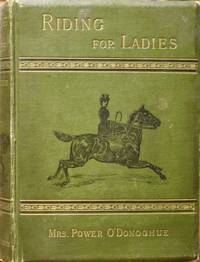 Riding for Ladies. The Common Sense of Riding. With hints on the stable. Illustrated by A[lfred] Chantrey Corbould.

Riding for Ladies. The Common Sense of Riding. With hints on the stable. Illustrated by A[lfred] Chantrey Corbould.

Boston: Roberts Brothers, 1887. First American edition. A London edition was published in the same year. The present edition is uncommon with only eight copies on OCLC (seven in the Northeast and one in Ohio). . Publisher's olive-green pictorial cloth with gilt lettering and decoration on upper board and spine. Some rubbing to extremities and spine. Black coated endpapers. Ownership signature of Alice Jones Willock (1867 – 1939) and armorial bookplate of her son Franklin Jones Willock (1891 – 1952), members of a family of skilled American steeplechase riders and hunters. With frontispiece of the author, 13 plates, and 55 illustrations (most half-page). Pages 346 to 378 are richly illustrated ads for equestrian gear like saddles, boots, habits, and hats; books on hunting and the care of horses; and books on the food, culture, and wildlife of India. Binding a bit loose but sound, a couple leaves coming loose at beginning of book. Some marginal toning. A very good, bright copy. Nannie Lambert Power O'Donoghue (1843 – 1940) was an Irish journalist, novelist, poet, and the first person to ride Ireland's three most formidable steeplechase courses without a refusal or a mistake. As one of the most notable equestrians of her day, O'Donoghue observed the subpar skills of other woman equestrians and wrote the present work as an "exhaustive" guide "covering dress, tackle, mounting, seat, and all aspects of riding and care for horses," (Hourican). She also included stories of her own riding career and adventures in the Meath and Kildare foxhunting clubs. O'Donoghue's journalism career included writing for the Irish Times, the Lady's Pictorial, and other periodicals, as well as editing the Irish Society. Her novels included The Knave of Clubs (1868); Unfairly Won (1882); and A Beggar on Horseback (1884), her best and most successful novel.

CWO Visa, MC , American Express, Discover SHipping: $12.00 1st ordinary-sized book within the U.S., at cost for others. Our normal method of shipping within the U.S. is U.P.S. International orders shipped at cost; please inquire about costs of air and surface shipment. All books guaranteed as described. Items returnable within ten days if the customer is dissatisfied; please phone or e-mail first. Customers are encouraged to e-mail us with any questions before ordering.

Seller rating:
This seller has earned a 5 of 5 Stars rating from Biblio customers.
Biblio.com member since 2006
Los Angeles, California
Ask Seller a Question

Our office is located in Los Angeles on West Third Street, between the Beverly Center and Farmer's Market. Though we gave up an open shop after more than thirty years, we welcome serious customers and dealers. We are normally open from 10 to 6 Monday through Saturday. Since some of our less expensive books are located in a temperature-controlled storage area offsite, you may want to call ahead of time to insure that the book you want to see will be available. We feature a stock strong in literature, history, Western philosophy, women's studies, education, history of science and fine printing and artists' books. We are members of the Antiquarian Booksellers Association of America and the International League of Antiquarian Booksellers. We have books from the 15th to the 20th century in all prices ranges. We do appraisals for income tax and insurance purposes. We purchase individual books and libraries. Proprietor: Carol Sandberg

leaves
Very generally, "leaves" refers to the pages of a book, as in the common phrase, "loose-leaf pages." A leaf is a single sheet... [More]
bookplate
Highly sought after by some collectors, a book plate is an inscribed or decorative device that identifies the owner, or former... [More]
Cloth
"Cloth-bound" generally refers to a hardcover book with cloth covering the outside of the book covers. The cloth is stretched... [More]
gilt
The decorative application of gold or gold coloring to a portion of a book on the spine, edges of the text block, or an inlay in... [More]
spine
The outer portion of a book which covers the actual binding. The spine usually faces outward when a book is placed on a shelf.... [More]
rubbing
Abrasion or wear to the surface. Usually used in reference to a book's boards or dust-jacket.