Home Bujoldfan The Road to Science Fiction #3: From Heinlein to Here 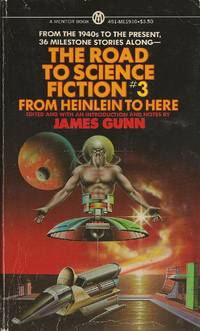 The Road to Science Fiction #3: From Heinlein to Here

The Road to Science Fiction #3: From Heinlein to Here

New York: Signet, 1978. mass paperback. good. Paul Stinson. Light edge wear to cover; corner bumps; spine creased. Pages tanning, clean and unmarked. Mentor mass paperback, 2nd printing, ISBN: 9780451619105, 656 pages, cover by Paul Stinson. 12mo (4.25"" x 7"") Classic anthology, 36 stories from 1939 - 1978, including: ""All You Zombies . . ."" by Robert A. Heinlein; Reason, by Isaac Asimov; Desertion, by Clifford D. Simak; Mimsy Were the Borogoves, by Henry Kuttner and C. L. Moore; The Million-Year Picnic, by Ray Bradbury; Thunder and Roses, by Theodore Sturgeon; That Only a Mother, by Judith Merril; Brooklyn Project, by William Tenn; Coming Attraction, by Fritz Leiber; The Sentinel, by Arthur C. Clarke; Sail On! Sail On! by Philip Jose Farmer; Critical Factor, by Hal Clement; Fondly Fahrenheit, by Alfred Bester; The Cold Equations, by Tom Godwin; The Game of Rat and Dragon, by Cordwainer Smith; Pilgrimage to Earth, by Robert Sheckley; Who Can Replace a Man? by Brian W. Aldiss; Harrison Bergeron, by Kurt Vonnegut, Jr.; The Streets of Ashkelon, by Harry Harrison; The Terminal Beach, by J. G. Ballard; Dolphin's Way, by Gordon R. Dickson; Slow Tuesday Night, by R. A. Lafferty; Day Million, by Frederik Pohl; We Can Remember It for You Wholesale, by Philip K. Dick; I Have No Mouth, and I Must Scream, by Harlan Ellison; Aye, and Gomorrah. . . by Samuel R. Delany; The Jigsaw Man, by Larry Niven; Kyrie, by Poul Anderson; Masks, by Damon Knight; Stand on Zanzibar (Excerpt) by John Brunner; The Big Flash, by Norman Spinrad; Sundance, by Robert Silverberg; The Left Hand of Darkness (Excerpt) by Ursula K. Le Guin; When It Changed, by Joanna Russ; The Engine at Heartspring's Center, by Roger Zelazny; Tricentennial, by Joe Haldeman.

G
Good describes the average used and worn book that has all pages or leaves present. Any defects must be noted. (as defined...[more]
12mo
A duodecimo is a book approximately 7 by 4.5 inches in size, or similar in size to a contemporary mass market paperback....[more]
spine
The outer portion of a book which covers the actual binding. The spine usually faces outward when a book is placed on a shelf....[more]