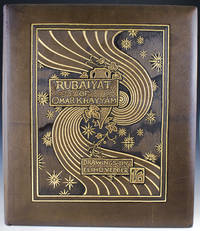 Rubáiyát of Omar Khayyám, the Astronomer-Poet of Persia. Rendered in English Verse by Edward Fitzgerald with an Accompaniment of Drawings by Elihu Vedder

Rubáiyát of Omar Khayyám, the Astronomer-Poet of Persia. Rendered in English Verse by Edward Fitzgerald with an Accompaniment of Drawings by Elihu Vedder

Boston: Houghton Mifflin and Company, 1884. Vedder, Elihu. Folio. (57), (viii)ff. First deluxe edition. One of 100 copies, printed on Japanese paper and signed by the artist on the limitation page. The fifty-seven Art-Nouveau illustrations, drawn in pencil, ink, chalk, and watercolor over ten months from May 1883 to March 1884, are here printed on Japanese paper using a then-new photographic printing process which could accurately reproduce the subtle gradations of the originals. Each image is mounted on a larger folded sheet for binding, leaving large margins to frame the image at the center. Vedder's design work is not just limited to the illustrations, but includes everything from the hand-written text to the design of the binding and endpapers. Eight pages at the end of the book have printed notes and an index of illustrations. The Rubaiyat of Omar Khayyam, a loose collection of quatrains, was first translated from Persian to English in 1859 by Edward Fitzgerald, over 700 years after the death of the author. It is clear that the most celebrated manifestation of Fitzgerald's translation is this 1884 arrangement by Elihu Vedder. Born in America, Vedder was one of the first artists of his generation to train in Paris. This training in the Academic style, with its emphasis on the classically proportioned female nude, combined with his penchant for mystical imagery and "visionary" style created the perfect style for the Rubaiyat, blending grounded, accurate reality with the excesses of feeling and emotion. Perhaps the emotion so evident in his drawings stems from the fact that the Rubaiyat was intensely personal for Vedder. After twice experiencing the loss of one of his children followed by the birth of another child within the year, he sought and found answers in Khayyam's message that the meaning of life was life itself and that death and renewal are part of that cycle. Vedder's rearrangement of the stanzas to fall into three sections-joy, death, and rebirth-echoes this revelation. Vedder also channels this conception into his art, which combines Christian and Classical figures with mystical imagery, like the "cosmic swirl," which he describes as "gradual concentration of elements that combine to form life; the sudden pause through the reverse of the movement which marks the instant of life; and then the gradual, ever-widening dispersion again of those elements into space." The first edition of Vedder's interpretation, which comprised both this deluxe edition and a regular edition with a printed cover and typeface text, was released in Boston on November 8, 1884, and sold out within six days. Later editions were smaller and used a half-tone screen process, meaning that only this first edition has truly fine renderings of Vedder's work. Interestingly, this is the text block that was used in Sangorski and Sutcliffe's legendary (but unlucky) jeweled binding, The Great Omar. In the original gilt-tooled morocco binding, with decorated silk doublures and large, elaborately gilt dentelles. A.e.g. Housed in a custom drop-back box. Foxing to the paper used to mount the illustrations, but rarely on the illustrations themselves, else a near fine copy of Vedder's masterwork. (Smithsonian American Art Museum, online Vedder Exhibition).

Bromer Booksellers specializes in rare and beautiful books, as well as highspots of literature. Owned and operated by Anne and David Bromer, who have been in the business of fine books for nearly fifty years, our shop carries a range of important private press books, designer bookbindings, literary first editions, illustrated books from the fifteenth century to the present, children's books, and miniature books.

text block
Most simply the inside pages of a book.  More precisely, the block of paper formed by the cut and stacked pages of a...[more]
gilt
The decorative application of gold or gold coloring to a portion of a book on the spine, edges of the text block, or an inlay in...[more]
fine
A book in fine condition exhibits no flaws. A fine condition book closely approaches As New condition, but may lack the...[more]
folio
A folio usually indicates a large book size of 15" in height or larger when used in the context of a book description....[more]
First Edition
In book collecting, the first edition is the earliest published form of a book. A book may have more than one first edition in...[more]
morocco
Morocco is a style of leather book binding that is usually made with goatskin, as it is durable and easy to dye. (see also...[more]