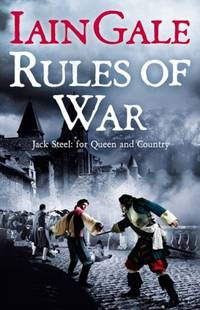 UK,8vo HB+dw/dj,SIGNED,1st edn.FINE/FINE.No owner inscrptn, but author's,handwritten,neat black ink signature - without dedication - to title page,and no price-clip to dw/dj.Bright,crisp, clean,colour pictorial artwork by Larry Rostant,illustrated dw/dj; with negligible shelf-wear and creasing to edges and corners - no nicks or tears present.Head+foot of spine/backstrip minisculely bumped with reciprocal creasing; a small diagonal crease spreading approx 3" from foot of spine/backstrip's gutter edge,along rear, lower edge - no other distinct creases.
Waterstone's b/w circular adhesive 'Signed by the Author at Waterstone's' label to front panel of dw/dj.Top edge has light dust-soiling/spotting towards fore-edges,but the fore-edges generally bright and clean and unaffected,contents bright,tight
and near pristine.Bright,clean,sharp-cornered,publisher's original,plain black cloth bds with bright,crisp,stamped red fluorescent gilt letters to spine/backstrip and immaculate plain white eps.UK,8vo HB+dw/dj,SIGNED,1st edn,1-332pp
[paginated] includes 16 chapters and an epilogue,plus [unpaginated] half-title,author SIGNED title page,a dedication, 2 b/w maps (The Low Countries,1706 and town map of Ostend), title separator page,and 8pp blanks at rear.Author's 2nd book featuring Lieutenant Jack Steel,following on from 'Man of Honour'.
Meet Lieutenant Jack Steel - gentleman,soldier,hero.
Ramilles 1706.One of the great victories of the British Army,a signal battle honour for the regiments who were there.But to Captain Steel,standing at the head of his Grenadiers,sinking into the swampy ground,at odds with his Allied partners and receiving contradictory orders,it was hard to see Lord Marlborough's grand strategy....
Even after victory,Steel finds himself mired in further difficulties. The Allies had thought that they were liberating the people of the Low Countries from the French but some turned out to prefer their previous masters who at least were Catholic and others wanted independence from all powers.Some of Steel's fellow officers wanted out of this war altogether.
Far from the battle lines he relishes,Jack Steel is sent undercover to discover and deal with the traitors.He needs to identify the loyal locals who would help a few British advance troops into the besieged city - a dangerous mission made deadly by his identification by an old enemy,and the brilliant malevolence of the renegade French pirate who is in charge of Ostende.
Jack Steel,first met in 'Man of Honour',is a splendid hero and he will march again in further military adventures,perfect for all fans of Bernard Cornwell's 'Sharpe'.
Since April 2013,again in March 2015,and in this year too,the UK Post Office has altered it's Pricing in Proportion template, altering its prices,weight allowances,dimensions and lowered its compensation rates too!
So,please contact rpaxtonden@blueyonder.co.uk ,because of the value of this item,for correct,insured shipping/P+p quotes - particularly ALL overseas buyers - BEFORE ordering through the order page!

Cloth
"Cloth-bound" generally refers to a hardcover book with cloth covering the outside of the book covers. The cloth is stretched...[more]
gutter
The inside margin of a book, connecting the pages to the joints near the binding.
bds
Common term for the covers of a hardbound book.  The term 'boards' refers to the thick cardboard under the paper or cloth...[more]
edges
The collective of the top, fore and bottom edges of the text block of the book, being that part of the edges of the pages of a...[more]
gilt
The decorative application of gold or gold coloring to a portion of a book on the spine, edges of the text block, or an inlay in...[more]
title page
A page at the front of a book which may contain the title of the book, any subtitles, the authors, contributors, editors, the...[more]