Rare books Russian History More Rare Books from Alcuin Books, ABAA-ILAB Russia: Or, a Compleat Historical Account of All the Nations Which Compose That Empire 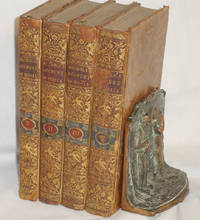 Russia: Or, a Compleat Historical Account of All the Nations Which Compose That Empire

Russia: Or, a Compleat Historical Account of All the Nations Which Compose That Empire

Pall-Mall, London, 1780-1783: For J. Nichols, T. Cadell, H. Payne, C. Dilly and N. Conant. First English Translation. Octavo. In four volumes. Volume I: Finnish Nations, cxi, (1) errata, 201pp. 2 plates. Volume II: Tartar nations, 401pp; 2 plates Volume III. Samoyede nations, 372pp. 2 plates, one closed tear to p. 271, description of plates and placement of the second plate in volume I which states it should be placed at p. 102 but in fact is placed at p. 199 (stated in the plate to be at p. 199). Volume IV. Mogol [sic] nations, 451pp., (1) pp. publisher's ad., 1 folding map, 12 plates of which one is folding.(18 plates and 1 map. total). The first demographic study of the Russian peoples and its territories. Translated by William Tooke (1744-1820) author and historian who is well known for his Russian studies while he resided in St. Petersburg. An exceptional history of how Siberia became a province. The history of the Russian provinces, the various inhabitants and their culture; including the Kara-Kitans, Mongouls [sic], the Burats; agriculture, mining, religious beliefs, and leaders. All volumes bound in tree calf, boards fragile with some splitting and chipping, spines flat and fully decorated in gilt, black and red contrasting labels gilt with some chipping (one label nearly gone), marbled endpapers, early bookplate with crown and snake with initials below "WBJ"., text clean, lacking only the three integral ads in volume 3. An uncommon work which has become exceedingly scarce.

Seller rating:
This seller has earned a 5 of 5 Stars rating from Biblio customers.
Biblio.com member since: 2006
Scottsdale, Arizona
Ask Seller a Question

gilt
The decorative application of gold or gold coloring to a portion of a book on the spine, edges of the text block, or an inlay in...[more]
errata
Errata: aka Errata Slip A piece of paper either laid in to the book correcting errors found in the printed text after being...[more]
calf
Calf or calf hide is a common form of leather binding.  Calf binding is naturally a light brown but there are ways to treat...[more]
octavo
Another of the terms referring to page or book size, octavo refers to a standard printer's sheet folded four times, producing...[more]
chipping
A defect in which small pieces are missing from the edges; fraying or small pieces of paper missing the edge of a paperback, or...[more]
bookplate
Highly sought after by some collectors, a book plate is an inscribed or decorative device that identifies the owner, or former...[more]
plate
Full page illustration or photograph. Plates are printed separately from the text of the book, and bound in at production. I.e.,...[more]