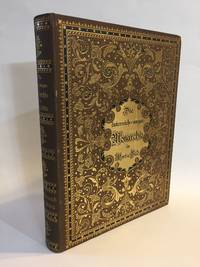 A beautiful copy. "Upper Austria and Salzburg" from the famous "Osterreichisch-ungarische Monarchie in Wort und Bild" series, complete sets of which are now unobtainable. Initiated in 1883 and largely compiled by the Crown Prince Rudolf himself, the entire work extended to 24 volumes (1885-1902). Ultimately the series contained a total of 12,596 text pages, 4529 illustrations, and 587 different articles, of which 432 were written by co-contributors. The present volume is a veritable encyclopedia of late nineteenth-century Salzburg and environs. The Austrian-Hungarian monarchy was the second largest state in Europe (following Russia) and one of the crucial great powers. With rich and fruitful soil, versatile industry, favorable traffic routes and sea ports, and a large territory, it was ideal an economic area: from the alpine countries came wood, cattle, iron and salt; industry florished in Vienna, Lower Austria and the Steiermark; Bohemia, Schlesia, Hungary, Croatia and Slovenia were particularly favorable for agriculture, textile-manufacturing, iron, food, stone, coal, and forest products. There was little need for imported goods. There was a diverse population, although the question of "nationality" was never solved, and led to the decay of the Austrian-Hungarian monarchy at the end of WWI. * Literature: R. Wagner, Das Kronprinzenwerk, in: Rudolf. Ein Leben im Schatten von Mayerling, Ausstellungskatalog, Wien 1990. * References: Nebehay / Wagner, Bibliographie Altosterreichischer Ansichtenwerke aus funf Jahrhunderten 459.

gilt
The decorative application of gold or gold coloring to a portion of a book on the spine, edges of the text block, or an inlay in...[more]
Cloth
"Cloth-bound" generally refers to a hardcover book with cloth covering the outside of the book covers. The cloth is stretched...[more]
First Edition
In book collecting, the first edition is the earliest published form of a book. A book may have more than one first edition in...[more]