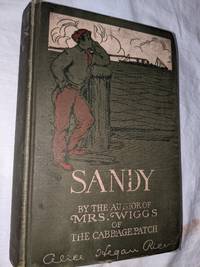 NEW YORK: THE CENTURY CO., 1905 NICE LOOKING GREEN COVER, WHITE PRINT AND DESIGN FRONT AND SPINE, LIGHT WEAR AND FADING SPINE. NICE ARTWORK THROUGHOUT, CLEAN AND TIGHT, TERRIFIC, ENTERTAINING BOOK. RICE WAS A WONDERFUL STORY TELLER. Samuel Sidney McClure (February 17, 1857 – March 21, 1949) was an Irish-American publisher who became known as a key figure in investigative, or muckraking, journalism. He co-founded and ran McClure's Magazine from 1893 to 1911, which ran numerous exposées of wrongdoing in business and politics, Sandy is the third book written by Alice Hegan Rice, and was the second best-selling novel in the United States in 1905. It was originally published in serial form in The Century Magazine from December 1904 through May 1905, and first appeared in novel form in April 1905. The novel is based on the boyhood stories of S. S. McClure, publisher of McClure's magazine, and his upbringing in Ireland and early struggles in the United States. Alice Hegan Rice, also known as Alice Caldwell Hegan, (January 11, 1870 – February 10, 1942) was an American novelist. Her 1901 novel Mrs. Wiggs of the Cabbage Patch became a play and four films. Rice was born on January 11, 1870, in Shelbyville, Kentucky, to Samuel Watson Hegan and Sallie P. Hegan. Her father was an art dealer so she was born with a knack for creativity.[citation needed] As a child, she would entertain her family members with creative stories that she came up with on the spot. ANTIQUE BOOKS DEN, WHERE INTERESTING BOOKS LIVE.

Tracking number provided with all domestic shipments. If books are large, of excessive weight or need to ship internationally additional shipping charges may need to be approved before shipment. 10 day return guarantee, with full refund for up to 10 days after delivery if an item arrives incorrectly described or damaged. Guaranteed satisfaction.

Seller rating:
This seller has earned a 5 of 5 Stars rating from Biblio customers.
Biblio.com member since 2013
Pittsburgh, Pennsylvania
Ask Seller a Question

Used, rare and out of print books. FIVE STAR RATING. Well kept, quality inventory that is updated weekly. The Antique Books Den prides itself on operating an honest establishment and guarantees customer satisfaction. Our goal is to keep our customers coming back again and again. We care. Tracking number is provided on all domestic shipments. Fast/ protected shipment. Please contact with any questions. antiquebooksden@gmail.comANTIQUE AND COLLECTIBLE BOOKS should be well taken care of so that the value and enjoyment increase with age. There is nothing like holding and reading a book that was published over 100 years ago.ANTIQUE BOOKS DEN, WHERE INTERESTING BOOKS LIVE. Honest small business, growing weekly. Earning your loyalty.

tight
Used to mean that the binding of a book has not been overly loosened by frequent use.
spine
The outer portion of a book which covers the actual binding. The spine usually faces outward when a book is placed on a shelf.... [More]