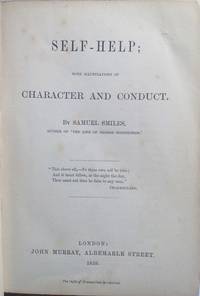 Self-Help: With Illustrations of Character and Conduct.

Self-Help: With Illustrations of Character and Conduct.

Classic of the Self-Help ethic

First edition. Samuel Smiles [1812-1904], was a Scottish writer, and social reformer. Self-Help became an immediate best-seller and one of the Victorian's most important statements on the virtues of hard work, thrift and perserverance. Smiles was a critic of rapacity and complacent affluence and advocated virtues central to the projects of other 19th century institutions that actively encouraged cultivation of the intellectual and moral working-class self such as mechanics' institutes, public libraries and people's colleges.

Smiles later developed this theme with Character 1871, Thrift 1875, and Duty 1880. With Charles Darwin's On the origin of species and John Stuart Mill's On Liberty, one of the influential books first published in 1859.

This first edition is infrequent and uncommon on the market, especially in the original cloth binding, unrestored and in excellent condition.

gilt
The decorative application of gold or gold coloring to a portion of a book on the spine, edges of the text block, or an inlay in...[more]
spine
The outer portion of a book which covers the actual binding. The spine usually faces outward when a book is placed on a shelf....[more]
hinge
The portion of the book closest to the spine that allows the book to be opened and closed.
First Edition
In book collecting, the first edition is the earliest published form of a book. A book may have more than one first edition in...[more]
Cloth
"Cloth-bound" generally refers to a hardcover book with cloth covering the outside of the book covers. The cloth is stretched...[more]