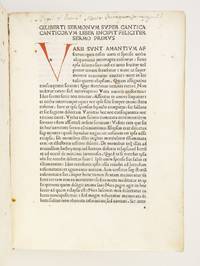 Florence: Nicolaus Laurentii, Alamanus, 16 April 1485. FIRST EDITION. 253 x 185 mm. (10 x 7 1/4"). [160] leaves, complete with first and last blank. Single column, 34 lines, roman type. Near contemporary vellum over pasteboards, smooth spine with ink lettering. First page with initials struck in red and a seven-line initial in red. Verso of front blank and head of first page of text with later ink inscriptions in Italian; one page with extensive but very neat early marginalia, occasional ink underlining and shoulder notes in an early hand. Goff G-304; BMC VI, 630; ISTC ig00304000; Encyclopedia of Christian Literature II, pp. 333-34. Vellum somewhat soiled and worn through in a few places (some loss along edges), boards tending to splay and with perhaps a dozen tiny wormholes, one opening slightly foxed, occasional trivial marginal smudges or spots, but still A FINE COPY INTERNALLY, clean and quite fresh throughout, with ample margins, and in a sound unsophisticated binding. This is quite a well-preserved copy of a collection of 46 sermons exploring in a scholarly way the allegorical themes and meanings of the Song of Songs, inspired by the unfinished work of Bernard of Clairvaux. St. Bernard (d. 1153) admitted his friend and disciple Gilbert of Hoylandia (d. 1172) to the Cistercian order he had founded, and by 1163 our author rose to the position of abbot of Swinestead Abbey in his native Lincolnshire, which he helped to transition from the Savigny to the Cistercian Order. One of the most revered figures of the 12th century monastic revival, St. Bernard devoted much of his scholarship to the Song of Songs, attributed to King Solomon, considered to be the greatest surviving love poem of the pre-Classical era. Beautiful and sensuous, the Canticle has long inspired debate over its origins and meaning--is it an erotically charged work of earthly love, or a divinely inspired allegory of the relationship between God and man? Bernard, unsurprisingly, took the latter view, and wrote a renowned and influential commentary on its meaning, which was left incomplete on his death. Gilbert continued his master's work, producing these 46 "sermons," which may be more properly described as scholarly arguments. Mabillon considered Gilbert's work the equal of Bernard's for persuasion, elevation, and ardor. German printer Nicolaus, or Nicolas, Laurentii had been working in Florence from at least 1477, and according to the BMC "must have been busily employed." He was one of the earliest printers working with copper plates, as demonstrated by his most famous book, an edition of Dante with illustrations by Botticelli. The present work is quite rare in the marketplace: RBH and ABPC list just one copy of our first printing at auction since 1980.

verso
The page bound on the left side of a book, opposite to the recto page.
spine
The outer portion of a book which covers the actual binding. The spine usually faces outward when a book is placed on a shelf....[more]
vellum
Vellum is a sheet of specialty prepared skin of lamb, calf, or goat kid used for binding a book or for printing and writing. ...[more]
soiled
Generally refers to minor discoloration or staining.
marginalia
Marginalia, in brief, are notes written in the margins, or beside the text of a book by a previous owner.  This is very...[more]
leaves
Very generally, "leaves" refers to the pages of a book, as in the common phrase, "loose-leaf pages." A leaf is a single sheet...[more]
fine
A book in fine condition exhibits no flaws. A fine condition book closely approaches As New condition, but may lack the...[more]
foxed
Foxing is the age related browning, or brown-yellowish spots, that can occur to book paper over time. When this aging process...[more]
First Edition
In book collecting, the first edition is the earliest published form of a book. A book may have more than one first edition in...[more]