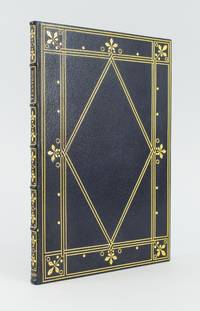 Hammersmith: Doves Press, 1902. ONE OF 325 COPIES on paper (and 25 on vellum). 233 x 165 mm. (9 1/4 x 6 1/2"). 55, [1] pp. ONE OF 325 COPIES on paper (and 25 on vellum). EXTREMELY ATTRACTIVE DARK BLUE CRUSHED MOROCCO, GILT, IN THE STYLE OF THE DOVES BINDERY (stamp-signed and dated 1909 on rear turn-in), covers with gilt frame formed by interlocking double rules, side- and cornerpieces with oakleaf clusters accented by open circles and solid dots, large double gilt-rule lozenge in central panel, raised bands, spine gilt in compartments with open circle at center, an oakleaf cluster extending above and below it, dots in corners, gilt vertical titling, gilt-ruled turn-ins with oakleaf clusters at corners, all edges gilt and gauffered with two rows of dots. In a blue cloth slipcase. Tomkinson, p. 45; Tidcombe DP-4. For the binding: Tidcombe, p. 463 The usual faint offsetting from the facing turn-ins on the front and rear free endpaper, half a dozen leaves with minor foxing just to the lower fore-edge corner, otherwise VERY FINE, the text clean, fresh, and smooth, and the lovely binding especially lustrous and virtually unworn. This is one of the 26 intriguing (and obviously uncommon) examples Tidcombe has identified as imitation Doves bindings, a group of handsomely executed volumes that continue to be mysterious. Tidcombe differentiates between forgeries (those books that are stamp-signed with "C - S" and a date) on the one hand and unsigned "copies of Doves bindings or bindings in the Doves style" on the other. But she treats them as one group "because they have several features in common." For example, signed or unsigned, all of the suspect bindings cover Doves Press books, all are bound in dark blue morocco, and all have green silk double headbands with a visible red core, the letters "E" and "S" are close together on the signature pallet, and so on. Although Tidcombe suggests that the person responsible for the forged Doves bindings could possibly have been the former Doves Bindery finisher Charles McLeish, she does not settle on him or any other likely candidate. Whoever was behind them, the volumes in this puzzling group of bindings--like other forgeries and imitations of historically important cultural artifacts--are actively collected for their value as counterfeits. The present binding differs from its fellows by offering significantly more in the way of gilt decoration. The work here is the fourth publication of the Doves Press, a volume that gathers together a number of poems by Tennyson, written at various times in his long life and all reflecting his abiding interest in Homer and Greek myth. The collection is framed by two short translations of passages from Homer's "Iliad," both featuring images of fire. Two original poems concern the tragic figure of Oenone, the first love of Paris, and two are inspired by the "Odyssey." The other three treat, in turn, the figure of the Theban seer Tiresias; Tithonus, lover of the goddess of Dawn; and the myth of the theft of Persephone by Death.

gilt
The decorative application of gold or gold coloring to a portion of a book on the spine, edges of the text block, or an inlay in...[more]
Cloth
"Cloth-bound" generally refers to a hardcover book with cloth covering the outside of the book covers. The cloth is stretched...[more]
morocco
Morocco is a style of leather book binding that is usually made with goatskin, as it is durable and easy to dye. (see also...[more]
leaves
Very generally, "leaves" refers to the pages of a book, as in the common phrase, "loose-leaf pages." A leaf is a single sheet...[more]
fine
A book in fine condition exhibits no flaws. A fine condition book closely approaches As New condition, but may lack the...[more]
edges
The collective of the top, fore and bottom edges of the text block of the book, being that part of the edges of the pages of a...[more]
raised band(s)
Raised bands refer to the ridges that protrude slightly from the spine on leather bound books.  The bands are created...[more]