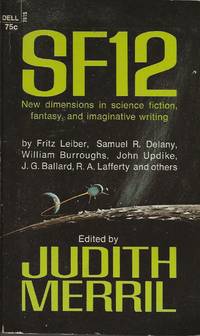 New York: Dell, 1969. First thus. Mass Paperback. good. Paul Lehr. First paperback edition. Creases to spine and cover. Pages are clean and unmarked; lightly tanning; old book smell. Dell mass paperback, first printing June 1969 (stated), Dell #7815, 384 pages, cover art by Paul Lehr. 12mo (4.25" x 7") Introduction: Fish Out of Water, Man Beside Himself, by Judith Merril. Stories: The Cinemagicians, poem by Tuli Kupferberg; In Seclusion, by Harvey Jacobs; The Food Farm, by Kit Reed; Gogol's Wife, by Tommaso Landolfi; The Balloon, by Donald Barthelme; The Cloud-Sculptors of Coral D, by J. G. Ballard; Luana, by Gilbert Thomas; W-a-v-e-r, poem by Tuli Kupferberg; During the Jurassic, by John Updike; The Fall of Frenchy Steiner, by Hilary Bailey; Light of Other Days, by Bob Shaw (nominated, 1967 Hugo, Nebula Awards); Beyond the Weeds, by Peter Tate; Crab-Apple Crisis, by George MacBeth; The Primary Education of the Camiroi; by R. A. Lafferty; When I Was Miss Dow, by Sonya Dorman (nominated, 1995 Tiptree Retrospective award); A Vacation on Earth, by Thomas M. Disch; Confluence, by Brian W. Aldiss; Journal from Ellipsia (excerpt) by Hortense Calisher; An Ornament to His Profession, by Charles L. Harness (nominated, 1967 Hugo, Nebula Awards); Narrow Valley, by R. A. Lafferty; They Do Not Always Remember, by William S. Burroughs; The Winter Flies, by Fritz Leiber; When I First Read ... poem by Dick Allen; You: Coma: Marilyn Monroe, by J. G. Ballard; And More Changes Still, by Henri Michaux; The Other, by Katherine MacLean; Chicken Icarus, by Carol Emshwiller; In the Egg, poem by Gnter Grass; The Star-Pit, by Samuel R. Delany (Finalist, 1968 Hugo Award); Personal, by Tuli Kupferberg.

G
Good describes the average used and worn book that has all pages or leaves present. Any defects must be noted. (as defined...[more]
spine
The outer portion of a book which covers the actual binding. The spine usually faces outward when a book is placed on a shelf....[more]
12mo
A duodecimo is a book approximately 7 by 4.5 inches in size, or similar in size to a contemporary mass market paperback....[more]