Home Black Dog Rare Books A Short Discourse concerning the Pestilential Contagion, and the Methods to be used to prevent it. 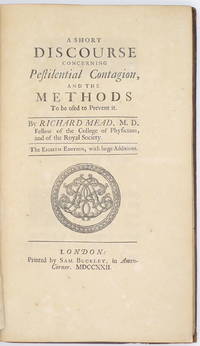 A Short Discourse concerning the Pestilential Contagion, and the Methods to be used to prevent it.

A Short Discourse concerning the Pestilential Contagion, and the Methods to be used to prevent it.

The eighth edition of Mead's epochal treatise on infectious diseases.

"The present treatise is one of the most important works in the history of public health because of its impact on the theory of contagion. Here Mead states quite clearly that the disease is contagious---"Contagion is propagated by three Causes, the Air, Diseased Persons; and Goods transported from infected Places" (p. 2).

In 1719 an outbreak of plague in Marseilles caused great concern in England and Mead was asked to submit a report on the matter. As a result of his recommendations, quarantine was imposed for a time but later relaxed because of political opposition and abatement of the plague in France. In the book Mead discusses the origin, nature, and spread of the plague and places special emphasis on preventive measures that may be taken against the plague and therapeutic remedies that may be employed. The book met with tremendous success and went through six editions in 1720 and had reached a ninth edition by 1744. It was also translated into Latin, Italian, and Dutch" (Heirs of Hippocrates).

This well-designed edition was actually printed by William Bowyer, who printed 1500 copies in demy 8vo and 300 in royal 8vo.

spine
The outer portion of a book which covers the actual binding. The spine usually faces outward when a book is placed on a shelf....[more]
tail
The heel of the spine.
calf
Calf or calf hide is a common form of leather binding.  Calf binding is naturally a light brown but there are ways to treat...[more]
gilt
The decorative application of gold or gold coloring to a portion of a book on the spine, edges of the text block, or an inlay in...[more]
edges
The collective of the top, fore and bottom edges of the text block of the book, being that part of the edges of the pages of a...[more]