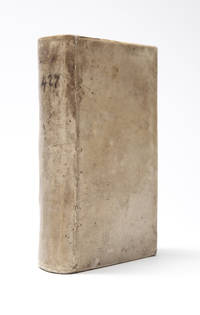 An extraordinary early 17th-century medico-legal book on the Virginity of Women, rife with magic and superstition. The author's "scientific" arguments rest on Pliny, Isidore of Seville, and Bartholomaeus Anglicus to maintain, i.a., that a scorpion injures a virgin far more than it does other women. He refers to astrology and believes that sitting on a certain root will break the hymen. A tree will be damaged if a virgin plucks its first fruits, but the idea that a virgin must throw her nightgown into the first after her first menstruation is mere "superstition." The work describes virginity according to canonical and civil law, as well as natural and "divine" law, with interesting discursions into sexual love and marriage. The book is a useful introduction to early modern reasoning on sexual and reproductive issues. Â

Kornmann (ca.1580-1620), a Frankfurt lawyer, here offers his counsel and a plethora of curious, sacred and profane information on the legal rights and moral duties of women, and the rules and conduct of women in matters of love and sex based upon classical writings, theology, superstition, magic, popular folklore, and his own unusual, rather modern opinions. Thus while we are presented with positive views of women in the arts, diplomacy, and military service, it is a remarkable fact that Kornmann suggests that a tree will die if a virgin plucks the first fruit from it. We also learn about the role of succubi and incubi; the best colors for women to wear; and what parts of the human body are ruled by the zodiac sign Virgo (the virgin). Â

The two tracts herein were first published in 1610 and were immediately successful, with six editions in the 17th-century alone. All early editions, including the present, are scarce. A fascinating, compelling volume of considerable interest to legal historians. Â

vellum
Vellum is a sheet of specialty prepared skin of lamb, calf, or goat kid used for binding a book or for printing and writing. ...[more]
soiled
Generally refers to minor discoloration or staining.
edges
The collective of the top, fore and bottom edges of the text block of the book, being that part of the edges of the pages of a...[more]