Home Heritage Book Shop, LLC This Side of Paradise 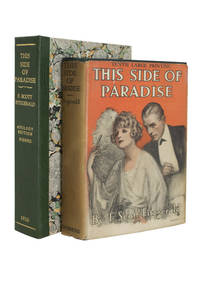 This Side of Paradise

This Side of Paradise

Signed Edition Of Fitzgerald's First Book in Dust Jacket FITZGERALD, F. Scott. This Side of Paradise. Charles Scribnerís Sons, New York: 1920. First edition, third printing (issued the same month as the first and the only printing with Fitzgerald's signatures) of Fitzgerald's first novel, one of approximately 500 copies with the tipped-in "Author's Apology" leaf boldly signed in pen, "Sincerely, F. Scott Fitzgerald." Octavo (7 1/2 x 5 1/4 inches; 190 x 133 mm). [8], [1]-305, [1, blank] pp. Publisher's original full green cloth. Front board lettered in blind. Spine lettered in gilt. Fitzgerald's signature bold and fine. Near-fine cloth. Gilt bright, but just barely rubbed on a few letters. An exceptional copy. In contemporary Scribner's (not first edition) dust jacket. Jacket with a few chips along edges. Tape repairs along the joints on the inside of the jacket, barely visible on the outside of jacket. Spine of jacket a bit darkened. Overall very good. Housed in a quarter morocco over marbled boards clamshell. Third printing (the only issued with the tipped-in "Apology"), published in the same month as the first. Prepared for an American Booksellers Association convention, Fitzgerald's signed "Apology" reads: "I don't want to talk about myself because I'll admit I did that somewhat in this book. In fact, to write it took three months; to conceive it-three minutes; to collect the data in it-all my life. The idea of writing it came on the first of last July: it was a substitute form of dissipation. My whole theory of writing I can sum up in one sentence: An author ought to write for the youth of his own generation, the critics of the next, and the schoolmasters of ever afterward. So, gentlemen, consider all the cocktails mentioned in this book drunk by me as a toast to the American Booksellers Association. May, 1920." Contrary to his claim, Fitzgerald began writing the novel in 1917, revising it several times until Scribner's accepted it for publication in 1919. Bruccoli, Fitzgerald, A.5.1.c.. HBS 67951. $15,000

edges
The collective of the top, fore and bottom edges of the text block of the book, being that part of the edges of the pages of a...[more]
Cloth
"Cloth-bound" generally refers to a hardcover book with cloth covering the outside of the book covers. The cloth is stretched...[more]
jacket
Sometimes used as another term for dust jacket, a protective and often decorative wrapper, usually made of paper which wraps...[more]
octavo
Another of the terms referring to page or book size, octavo refers to a standard printer's sheet folded four times, producing...[more]
spine
The outer portion of a book which covers the actual binding. The spine usually faces outward when a book is placed on a shelf....[more]
New
A new book is a book previously not circulated to a buyer. Although a new book is typically free of any faults or defects,...[more]
gilt
The decorative application of gold or gold coloring to a portion of a book on the spine, edges of the text block, or an inlay in...[more]
First Edition
In book collecting, the first edition is the earliest published form of a book. A book may have more than one first edition in...[more]
Marbled boards
...[more]
fine
A book in fine condition exhibits no flaws. A fine condition book closely approaches As New condition, but may lack the...[more]
morocco
Morocco is a style of leather book binding that is usually made with goatskin, as it is durable and easy to dye. (see also...[more]