Home Raptis Rare Books This Side of Paradise. 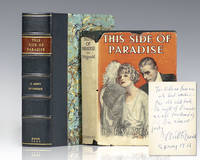 This Side of Paradise.

This Side of Paradise.

New York: Charles Scribner's Sons, 1920. First edition of Fitzgerald's first novel, with an initial printing of only 3,000 copies, which sold out in three days. Octavo, original cloth. Presentation copy, inscribed by the author on the front free endpaper with a full page inscription, "For William Henneman with best wishes - this old old book; the sight of it reminds me, all too dramaticly [sic], that I'm almost forty. F. Scott Fitzgerald Spring 1936." Very good with some inner strengthening in a rare early dust jacket with light and wear. Housed in a custom half morocco clamshell box. A unique example displaying Fitzgerald's thoughts about his early writing. This Side of Paradise is the debut novel by F. Scott Fitzgerald. It takes its title from a line of Rupert Brooke's poem Tiare Tahiti, the book examines the lives and morality of post-World War I youth. The novel's hero, Amory Blaine, is a handsome, spoiled young man who attends Princeton, becomes involved in literary activities and has several ill-fated romances. A portrait of the Lost Generation, the novel addresses Fitzgerald's later theme of love distorted by social climbing and greed" (Merriam-Webster's Encyclopedia of Literature). Fitzgerald was still at university when he submitted the manuscript, then titled The Romantic Egoist, to Charles Scribner, whom he had known at Princeton. It was published on 26 March 1920, was an immediate success, and launched Fitzgerald's literary career.

Cloth
"Cloth-bound" generally refers to a hardcover book with cloth covering the outside of the book covers. The cloth is stretched...[more]
jacket
Sometimes used as another term for dust jacket, a protective and often decorative wrapper, usually made of paper which wraps...[more]
clamshell box
A protective box designed for storing and preserving a bound book or loose sheets. A clamshell box is hinged on one side, with...[more]
inscribed
When a book is described as being inscribed, it indicates that a short note written by the author or a previous owner has...[more]
First Edition
In book collecting, the first edition is the earliest published form of a book. A book may have more than one first edition in...[more]
octavo
Another of the terms referring to page or book size, octavo refers to a standard printer's sheet folded four times, producing...[more]
morocco
Morocco is a style of leather book binding that is usually made with goatskin, as it is durable and easy to dye. (see also...[more]