Home Captain Ahab's Rare Books THIS SIDE OF PARADISE 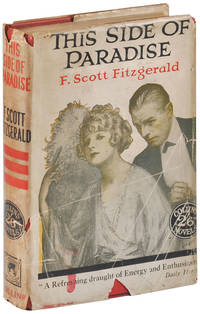 THIS SIDE OF PARADISE

THIS SIDE OF PARADISE

London: W. Collins Sons & Co. Ltd., 1923. Second Impression. Octavo (19cm); red cloth, with titles stamped in black on spine and front cover; dustjacket; viii,292pp. Base of spine gently nudged, with a few tiny tears; upper edge of textblock slightly dusty, with some faint offsetting to endpapers, else clean throughout; Near Fine. Dustjacket is uniformly dust-soiled, edge-worn, with several shallow losses, a few scattered stains, and a few long tears with attendant creases, neatly tape-mended on verso; substantially complete and unrestored, but Very Good only. Early UK printing of Fitzgerald's first novel, centered around the lives of young socialites in post-World War I New York. Both the first and second UK printings of This Side of Paradise vary "unauthoritatively from the first Scribner's printing of the novel in some 850 readings. This figure does not include variants caused by Collins's omission of periods after abbreviations or alteration of quotation marks. Of the 850 variants, 32 are substantive" (Bruccoli, p.22). As with all Fitzgerald's pre-Gatsby works published by Collins, this title is scarce in dustjacket; we find no examples in the auction record, and Matthew Bruccoli, Fitzgerald's bibliographer, mentioned not seeing a jacket for the first Collins printing, and the only observed example of the second printing seen in Fitzgerald's own scrapbooks, lacking the rear cover and flaps. Bruccoli A5.2.b.

Seller rating:
This seller has earned a 5 of 5 Stars rating from Biblio customers.
Biblio.com member since: 2010
Stephenson, Virginia
Ask Seller a Question

octavo
Another of the terms referring to page or book size, octavo refers to a standard printer's sheet folded four times, producing...[more]
jacket
Sometimes used as another term for dust jacket, a protective and often decorative wrapper, usually made of paper which wraps...[more]
Cloth
"Cloth-bound" generally refers to a hardcover book with cloth covering the outside of the book covers. The cloth is stretched...[more]
flap(s)
The portion of a book cover or cover jacket that folds into the book from front to back.  The flap can contain biographical...[more]
New
A new book is a book previously not circulated to a buyer. Although a new book is typically free of any faults or defects,...[more]
spine
The outer portion of a book which covers the actual binding. The spine usually faces outward when a book is placed on a shelf....[more]
fine
A book in fine condition exhibits no flaws. A fine condition book closely approaches As New condition, but may lack the...[more]