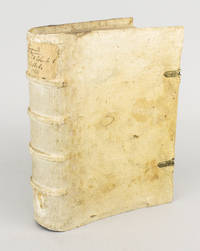 by (COUNTER-REFORMATION). RUPERT OF DEUTZ

Dillingen: Sebald Mayer, 1567. First German Edition. 208 x 160 mm. (8 1/4 x 6 1/4"). 26 p.l., 416 leaves.Translated by Nicolaus Hug. Contemporary blind-stamped pigskin over bevelled wooden boards, inner medallion roll with Julius Caesar, Ovid, Cicero, and Virgil, outer roll with King David and Christ, raised bands, later paper label with manuscript title, original catch-plates and anchor-plates, remains of thongs (two small contemporary patches to boards). With full-page woodcut of the Apocalypse with the Queen of Heaven and the Beast. Title page printed in red and black, and with ink inscription in a 17th century hand: "Ex bibliotheca Wisensteig, de[?] 1626." VD16 R 3806. Significant splaying to front board, small patch of worming to lower cover, pigskin a little soiled, one-inch closed tear to front free endpaper, mild foxing to title page and six other pages, other trivial defects, otherwise an excellent copy, quite clean and crisp internally, in a sturdy binding. Featuring a dramatic full-page woodcut of the Apocalypse, with the Queen of Heaven standing triumphant as Archangel Michael spears the Beast, this is Rupert of Deutz's account of the war between God and Satan (with God's assured victory), translated into German and presented for a Counter-Reformation audience. Rupert (ca. 1075-ca. 1129) was Abbot of Deutz and a major figure in Medieval scriptural commentary. First appearing in Latin as "De Victoria Verbi Dei" in 1123-24 and printed in that form once in the 15th century, our work puts the cosmic battle in the context of a commentary on the 12 minor prophets, and how they prefigure the accounts of the end times in the New Testament. The Apocalypse was a popular theme among Catholic officials, who saw the Protestant Reformation as potentially world-ending; this fact would account for the printing of the present work in the 1560s. This edition was produced at Dillingen, a center of the Counter-Reformation in Germany, by Sebald Mayer (active 1540-76), whose workshop was devoted to Counter-Reformation publications; with his son Johann, they produced nearly 800 titles. This is a rare book: OCLC lists only six copies, all in Europe, and no copies have appeared at auction in 40 years.

raised band(s)
Raised bands refer to the ridges that protrude slightly from the spine on leather bound books.  The bands are created...[more]
soiled
Generally refers to minor discoloration or staining.
leaves
Very generally, "leaves" refers to the pages of a book, as in the common phrase, "loose-leaf pages." A leaf is a single sheet...[more]
New
A new book is a book previously not circulated to a buyer. Although a new book is typically free of any faults or defects,...[more]
title page
A page at the front of a book which may contain the title of the book, any subtitles, the authors, contributors, editors, the...[more]
crisp
A term often used to indicate a book's new-like condition. Indicates that the hinges are not loosened. A book described as crisp...[more]