Join us October 7–16, 2022 for our upcoming virtual antiquarian book fair!
Preregister now for Biblio.live and get $10 to use at the fair.
Home GraceClerc.Co SIGNED BOOKPLATE, 1ST EDITION Mixed Plate: Chronicles of an All-American Combo 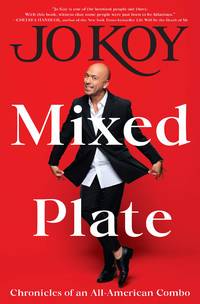 (You can add more at checkout.)
Item Price
$32.00
Or just $28.80 with a
Bibliophiles Club Membership
$5.00 Shipping to USA
Standard delivery: 2 to 8 days
More Shipping Options

A stunning, hilarious memoir from beloved comedian Jo Koy, "far and away one of the funniest people out there" (Chelsea Handler). Mixed Plate illuminates the burning drive and unique humor that makes Jo Koy one of today's most successful comedians. Includes never-before-seen photos. Well guys, here it is—my story. A funny, sad, at times pathetic but also a kick-ass tale of how a half-Filipino, half-white kid whose mom thought (and still thinks) his career goal was to become a clown became a success. Not an overnight success, because that would have made for a really short read, but an All-American success who could give my immigrant mom the kind of life she hoped for when she came to this country, and my son the kind of life I wished I'd had as a kid. With all the details of what it felt like to get the doors closed in my face, to grind it out on the road with my arsenal of dick jokes, and how my career finally took off once I embraced the craziness of my family, which I always thought was uniquely Filipino but turns out is as universal as it gets. In this book, I'll take you behind the mic, behind the curtain—OK, way behind it. From growing up with a mom who made me dance like Michael Jackson at the Knights of Columbus to some real dark stuff, the stuff we don't talk about often enough as immigrants. Mental health, poverty, drinking. And show you the path to my American Dream. Which was paved with a lot of failures, department store raffle tickets to win free color televisions, bad jokes, old VHS tapes, a motorcycle my mom probably still hates, the only college final I aced (wasn't math), and getting my failures first laugh on stage. There's photo evidence of it all here, too. In this book, I get serious about my funny. And I want to make you laugh a little while I do it. I'm like Hawaii's favorite lunch—the mixed plate. A little bit of this, a little bit of that. My book Mixed Plate is too. Jo Koy is a comedian, actor, writer, and podcast host who sells out arenas around the world by telling real stories about his life, his family, and finding his way in the entertainment industry. He has multiple hit comedy specials on Netflix, and his unique brand of humor has been featured on Comedy Central, The Tonight Show, and Chelsea Lately. In 2018, Jo received the "Stand-Up Comedian of the Year" award at the legendary Just for Laughs Comedy Festival in Montreal, and the previous year he reached number-one on the Billboard Charts for his standup album, "Live from Seattle." In 2019 in Honolulu, Jo broke the record for the most tickets sold by a single artist at 23,000 with his eleven sold-out shows at the Neal S. Blaisdell Concert Hall, inspiring the mayor to proclaim November 24 "Jo Koy Day." Jo currently lives in Los Angeles with his son, Joe Jr., who inspires him to be a better performer, father, and man every single day.

Dedicated to providing you with the best source for all things books, offering a wide range of authors from chefs to celebrities to politicians to novelists.

plate
Full page illustration or photograph. Plates are printed separately from the text of the book, and bound in at production. I.e.,... [More]