Home D & E Lake Ltd. (ABAC, ILAB) Silva: Or, A Discourse Of Forest-Trees, And The Propagation of Timber in his Majesty's Dominions.Together… 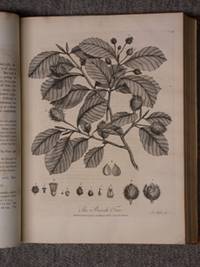 Silva: Or, A Discourse Of Forest-Trees, And The Propagation of Timber in his Majesty's Dominions.Together With An Historical Account of the Sacredness and Use of Standing Groves.With Notes by A.Hunter, M.D. F.R.S

Silva: Or, A Discourse Of Forest-Trees, And The Propagation of Timber in his Majesty's Dominions.Together With An Historical Account of the Sacredness and Use of Standing Groves.With Notes by A.Hunter, M.D. F.R.S

York: Printed by A.Ward for J.Dodsley, T.Cadell., 1776., 1776. 4to. pp. 27 p.l. (incl. list of subscribers), 649, [9]index. engraved frontis. portrait of Evelyn by Bartolozzi, 40 engraved plates (1 folding), most drawn & engraved by John Miller (Johann Sebastian Müller). folding table. contemporary calf, rebacked preserving spine label, corners renewed (some offsetting from plates, scattered foxing & light browning). printed subscription receipt signed by Hunter tipped in. First Hunter Edition. Originally published in 1664, Evelyn's Sylva was "the first important book to be published in [Britain] on forest trees.no other work on arboriculture exerted a greater influence on forestry in this country.and certainly no other book on the subject was so often quoted." (Henrey, pp. 101, 108). This 1776 edition, prepared by Dr. Alexander Hunter [1729-1809] of York, virtually doubled the size of the original text, adding extensive annotations, practical instructions, and references to the best eighteenth century authorities, including Linnaeus, Philip Miller, Duhamel du Monceau, Buffon, and Pehr Kalm. There is an excellent account by William Speechly, gardener to the Duke of Portland, describing the method of forming plantations used at Welbeck. According to Hunter the text had been collated with all five of the previous editions and corrected with the help of "some Original Manuscripts". Also notable in this edition are the thirty-six fine plates showing foliage, flowers, and fruits of various types of trees, drawn and engraved by John Miller (Johann Sebastian Müller). Other plates include a 'Winter View of the Cawthorpe Oak', near Wetherby, Yorkshire, engraved by Miller after a drawing by William Burgh, and two views of the famous Greendale Oak at the Duke of Portland's estate engraved by Thomas Vivares and A.Rooker after drawings made in 1775 by Samuel Hieronymus Grimm. Henrey 137. Keynes 47 (calling for portrait & 39 plates) & 98. Pritzel 2766. cfRaphael, An Oak Spring Sylva, 33 (1786 edns.).. Signed by Author(s). 1st Edition.

Silva: Or, a Discourse of Forest-Trees, and the Propagation of Timber in His Majesty's Dominions, as It Was Delivered in the Royal Society, on the 15th of October 1662 by John Evelyn

Seller rating:
This seller has earned a 5 of 5 Stars rating from Biblio customers.
Biblio.com member since 2006
Toronto, Ontario
Ask Seller a Question

calf
Calf or calf hide is a common form of leather binding. Calf binding is naturally a light brown but there are ways to treat the... [More]
tipped in
Tipped In is used to describe something which has been glued into a book. Tipped-in items can include photos, book plates,... [More]
spine label
The paper or leather descriptive tag attached to the spine of the book, most commonly providing the title and author of the... [More]
fine
A book in fine condition exhibits no flaws. A fine condition book closely approaches As New condition, but may lack the... [More]
rebacked
having had the material covering the spine replaced. ... [More]