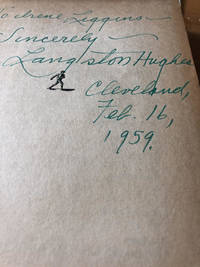 SIGNED First Edition Presentation copy of Hughes' Simple Takes a Wife, the breakthrough second title in Hughes' acclaimed "Simple" series, "The most famous character in black fiction." Inscribed by Langston Hughes to a close friend and longtime Cleveland NAACP member, Irene Liggins. Ralph Ellison praised Simple Takes a Wife as "a vivid picture of Negro life and its richness." and the New York Times, upon publication declared it "a superior achievement to the first of the series, Simple Speaks His Mind" (1950). "The new book is more of a piece, the material is more carefully and competently arranged, more unexpectedly presented; it is more brilliant, more skillfully written, funnier, and perhaps just a shade more tragic than its predecessor… This is true humor with a bite to it, spoken in the authentic language of 135th Street" (NYT). Hughes' 1957 Broadway play, Simply Heavenly, was based largely on Simple Takes a Wife. With "First Printing" on copyright page; as issued without dust jacket. Boldly and memorably inscribed on the front flyleaf: "To Irene Liggins-- Sincerely -- Langston Hughes Cleveland, Feb. 16, 1959." Irene Liggins who, with her husband Alfred Liggins, was a longstanding member of the NAACP. Hughes, a close friend, was a frequent visitor and houseguest at their home in Cleveland, a city he considered home while attending Central High School. As a sophomore in Cleveland's Central High School, Hughes published his first pieces of verse in the Central High Monthly, which regularly featured a number of his early poems and short stories (Rampersad, Life V.I, 27). Near the time of this inscription in February 1959, Hughes appeared in Cleveland for his "poetry-to-jazz" evenings to raise funds for Karamu House, a local community center where, while at Central High, he had been one of Karamu's first teachers for the neighborhood's children. Octavo, 240pp. Without front free endpaper (blank), as are many copies of this scarce 300 copy print run. Still a more splendid example than usual. Very good in publisher's original laminated pictorial tan cloth. Corners gently rubbed, inner hinges just barely exposed at the top edge, but a firm, tightly bound copy. Famously, this book was cheaply produced, and is often found beaten or repaired. This is a minimally handled, unrestored copy with evenly age-toned pages as usual. A response postcard from Simon & Schuster accompanies the book, indicating this copy was possibly a Review Copy. Downright Rare Langston Hughes from Cleveland, which he always considered "home." Book #C3304. $2200. We specialize in Rare Ayn Rand, history, and science.

Seller rating:
This seller has earned a 5 of 5 Stars rating from Biblio customers.
Biblio.com member since: 2018
Catskill, New York
Ask Seller a Question

Pen Ultimate Rare Books carries the largest selection of rare, signed, and manuscript Ayn Rand on the planet! We also carry landmark works of History and Science. And we LOVE English Grammar. Split an infinitive with us!

octavo
Another of the terms referring to page or book size, octavo refers to a standard printer's sheet folded four times, producing...[more]
New
A new book is a book previously not circulated to a buyer. Although a new book is typically free of any faults or defects,...[more]
jacket
Sometimes used as another term for dust jacket, a protective and often decorative wrapper, usually made of paper which wraps...[more]
inscribed
When a book is described as being inscribed, it indicates that a short note written by the author or a previous owner has...[more]
First Edition
In book collecting, the first edition is the earliest published form of a book. A book may have more than one first edition in...[more]
Cloth
"Cloth-bound" generally refers to a hardcover book with cloth covering the outside of the book covers. The cloth is stretched...[more]