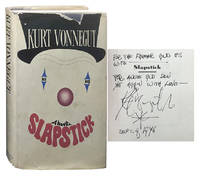 New York: Delacorte Press, 1976. First Edition. Hardcover. Very Good/Good. Presentation Copy. Inscribed on the title page by Vonnegut to his literary agent Donald Farber and his wife Annie. Very Good in a Good jacket, unclipped ($7.95), generally rubbed and soiled, a chip of loss at the top edge, creased at the front flap. Navy blue cloth, faded at the edges, with red ink and gilt lettering on the spine and front board. Square and firmly bound with a light blue top stain, clean internally. The novel, just like its 1984 film adaptation, was not well received. Still, this copy is important for its inscription and close association to Vonnegut's longtime friend and literary agent.

The book explores one of Vonnegut's favorite recurring themes, which is his belief in our need to belong extended families and how they would be an adequate, larger and more useful substitute for biological ones. The most endearing section of the novel, in my opinion, lies in its introduction, where Vonnegut candidly describes his beloved sister's death, which took place shortly after she had learnt of a train accident where her husband and children had been killed. As for the novel's plot, it follows the relationship of a boy and his sister who grow up together in isolation from the outside world because of their unsightliness. The boy turns out to be seen as more presentable and is separated from his sister, who grows to resent him for his seemingly desertion. Through some twists and turns they successively reunite and separate and after a major catastrophe, the boy becomes president of the United States, his campaign being centered on the formation of extended families on a grand scale.

All items are returnable for a refund within 30 days of receipt.

Seller rating:
This seller has earned a 5 of 5 Stars rating from Biblio customers.
Biblio.com member since:
Woodstock, Illinois
Ask Seller a Question

Based in the far northwest reaches of the Chicago suburbs, Carpetbagger Books specializes in literary fiction and modern firsts. Inventory is updated weekly, if not more frequently, so browse often. If you are after something particular, don't hesitate to communicate: not all inventory is uploaded online.

gilt
The decorative application of gold or gold coloring to a portion of a book on the spine, edges of the text block, or an inlay in...[more]
Cloth
"Cloth-bound" generally refers to a hardcover book with cloth covering the outside of the book covers. The cloth is stretched...[more]
spine
The outer portion of a book which covers the actual binding. The spine usually faces outward when a book is placed on a shelf....[more]
jacket
Sometimes used as another term for dust jacket, a protective and often decorative wrapper, usually made of paper which wraps...[more]
First Edition
In book collecting, the first edition is the earliest published form of a book. A book may have more than one first edition in...[more]
soiled
Generally refers to minor discoloration or staining.
edges
The collective of the top, fore and bottom edges of the text block of the book, being that part of the edges of the pages of a...[more]
inscribed
When a book is described as being inscribed, it indicates that a short note written by the author or a previous owner has...[more]
title page
A page at the front of a book which may contain the title of the book, any subtitles, the authors, contributors, editors, the...[more]

Home > Carpetbagger Books, IOBA > Slapstick
Yes, we have a new look!
Let us know what you think.