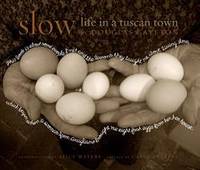 Slow: Life in a Tuscan Town

Slow: Life in a Tuscan Town

2009-09-29. Good. Ships with Tracking Number! INTERNATIONAL WORLDWIDE Shipping available. May not contain Access Codes or Supplements. May be re-issue. May be ex-library. Shipping & Handling by region. Buy with confidence, excellent customer service!

Douglas Gayeton is a filmmaker, photographer, and writer. His images are held in a number of influential museum and private collections around the world, and have been featured in numerous print and online media, such as Time Magazine. Since the early 90s he has created award-winning work at the boundaries of traditional and converging media for AOL, MSN, MTV, Yahoo, Fox, Napster, Vivendi, Sony, Viacom, Sega, Intel, National Geographic, PBS, Warner Bros, Columbia, and Virgin Records. Recent projects include LOST IN ITALY, a 26 episode interstitial TV series Gayeton created, directed, and shot for Fine Living, and A SECOND LIFE ODYSSEY for HBO, the first documentary shot inside a virtual world. Gayeton lectures frequently on art, technology and sustainability.

We stand by our service and offer a 14 day return guarantee. Item must be unused or in original stated condition at time of sale. 15% restocking fee for used items, 20% for new items.

Seller rating:
This seller has earned a 2 of 5 Stars rating from Biblio customers.
Biblio.com member since: 2014
Kittery, Maine
Ask Seller a Question

Books Express provides a curated collection of new and used books, toys, and gifts at fair prices. Our customer service and expedited responses and shipping set us apart from other sellers. The customer is the center of business and we take pride in creating delighted customers. We believe that sustainability is crucial to our business and the planet. We use recycled materials throughout our packaging process.