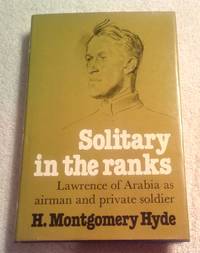 SOLITARY IN THE RANKS

SOLITARY IN THE RANKS: Lawrence of Arabia as Airman and Private Soldier

Following his spectacular organization of the 1916 Arab Revolt against the Turks, T.E. Lawrence, known as Lawrence of Arabia, was too famous to go back into service under his own name. He joined the RAF under an assumed name, but his identity was discovered. So he joined the Royal Tank Corps under another name, and then went back to the RAF, then to India.

This is the story of these years of Lawrence's military career, written by the British politician, historian and prolific biographer H Montgomery Hyde (1907-1989). It is apparently a fascinating and excellent book and was a best-seller.

It was published in 1978; this is a stated first American edition.

It is plain blue boards with brilliant silver lettering on the spine. Inside, there are numerous black and white photographs.

The dust jacket is unclipped and has minor shelf-wear--a couple of tiny tears on the back, which I have taped.

The book's original owner apparently read it to page 83. There is a small dog-ear there and nothing after. The spine has not been cracked. Other than some yellowing to the pages, it is in pristine condition.

Note: If you are outside of North America, the quoted shipping price is for surface mail without tracking. For other options, please contact me.

jacket
Sometimes used as another term for dust jacket, a protective and often decorative wrapper, usually made of paper which wraps...[more]
spine
The outer portion of a book which covers the actual binding. The spine usually faces outward when a book is placed on a shelf....[more]
cracked
In reference to a hinge or a book's binding, means that the glue which holds the opposing leaves has allowed them to separate,...[more]