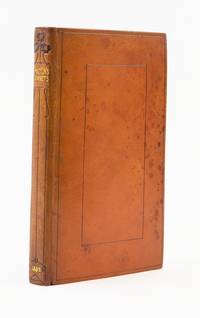 Elegantly printed on fine paper, this edition of the great poet done on the most luxurious of papers, with margins occupying easily twice as much area of the page as the text, was bound by the Guild of Women Binders, a group of British female artisans responsible for distinctively innovative binding decoration during a kind of golden moment at the very end of the 19th century. The bookseller Frank Karslake established the Guild in 1898 in order to give an organizational identity to a group of women already at work binding books in various parts of Britain, often in their own homes. Karslake first became interested in women binders when he visited the Victorian Era Exhibition at Earl's Court in 1897, held to celebrate the Queen's Diamond Jubilee. He was impressed with a number of bookbindings at the Jubilee exhibit, prominent among them being those of Mrs. Annie MacDonald of Edinburgh, and he invited the women to exhibit their work in his shop at 61 Charing Cross Road. The Guild was formed soon thereafter, when some of the women named Karslake as their agent. The Guild was closely associated with the Hampstead Bindery, the two groups exhibiting bindings together at the Paris Exhibition in 1900 and elsewhere. The elongated floral decoration on this binding is characteristic of the Guild's style, but the present example is more restrained than usual, and was likely done by a binder who was just beginning her career..

gilt
The decorative application of gold or gold coloring to a portion of a book on the spine, edges of the text block, or an inlay in... [More]
unopened
A state in which all or some of the pages of a book have not been separated from the adjacent pages, caused by a traditional... [More]
spine
The outer portion of a book which covers the actual binding. The spine usually faces outward when a book is placed on a shelf.... [More]
morocco
Morocco is a style of leather book binding that is usually made with goatskin, as it is durable and easy to dye. (see also... [More]
fine
A book in fine condition exhibits no flaws. A fine condition book closely approaches As New condition, but may lack the... [More]
top edge gilt
Top edge gilt refers to the practice of applying gold or a gold-like finish to the top of the text block (the edges the pages... [More]