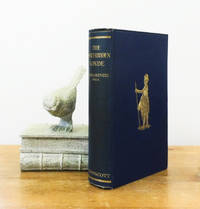 The Spirit- Ridden Konde: A Record Of The Interesting But Steadily Vanishing Customs And Ideas Gathered During Twenty-Four Years' Residence Amongst These Shy Inhabitants Of The Lake Nyasa Region, From Witch Doctors, Diviners, Hunters, Fishers And Every Native Source

The Spirit- Ridden Konde, D R Mackenzie. J.B. Lippincott Company, Philadelphia, 1925. First American edition. 8vo up to 9½" tall. xvi, 17-318 pages with index, frontispiece, folding map and 15 plates. 8vo. Blue illustrated cloth boards with gilt stamped figure to front and gilt titles to spine. Subtitled: "A Record Of The Interesting But Steadily Vanishing Customs And Ideas Gathered During Twenty-Four Years' Residence Amongst These Shy Inhabitants Of The Lake Nyasa Region, From Witch Doctors, Diviners, Hunters, Fishers And Every Native Source." Small foxing spots to upper margin area in first 30 pages with plates not affected; light rubbing to board corners and spine edges; otherwise fine without markings, tears or folds, binding is firm and straight with gilt remaining bright. A volume in highly collectible condition.
Contents include: Konde Warfare, Ancestral Spirits, Omens and Portents, Powers of Evil, Sickness and Medicine, Death and Burial, Things Forbidden, Hunting and Fishing, Arts and Crafts, Amusements and Relaxations. The Nyakyusa (also called the Sokile, Ngonde or Nkonde) are an African ethnic and linguistic group who live in the mountains of southern Tanzania and northern Malawi; the former German East Africa. They speak the Nyakyusa language, a member of the Bantu language family. In 1993 the Nyakusa population was estimated to number 1,050,000, with 750,000 living in Tanzania and 300,000 in Malawi.

About Back Lane Books (Member of IOBA)

Welcome! BACK LANE BOOKS is home to thousands of carefully selected antiquarian, rare and used books. Visitors are welcome - please phone ahead to make an appointment. I strive to provide accurate descriptions of each listing and I always include my own photographs of the item for sale. Appraisals are also available. Colleen Croft.backlanebooks@gmail.com www.backlanebooks.com 604 209-5072

rubbing
Abrasion or wear to the surface. Usually used in reference to a book's boards or dust-jacket.
fine
A book in fine condition exhibits no flaws. A fine condition book closely approaches As New condition, but may lack the...[more]
spine
The outer portion of a book which covers the actual binding. The spine usually faces outward when a book is placed on a shelf....[more]
gilt
The decorative application of gold or gold coloring to a portion of a book on the spine, edges of the text block, or an inlay in...[more]
Cloth
"Cloth-bound" generally refers to a hardcover book with cloth covering the outside of the book covers. The cloth is stretched...[more]