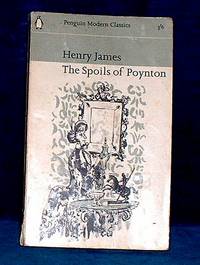 THE SPOILS OF POYNTON

THE SPOILS OF POYNTON

Henry James (1843-1916), born in New York City, was the son of noted religious philosopher Henry James, Sr., and brother of eminent psychologist and philosopher William James. He spent his early life in America and studied in Geneva, London and Paris during his adolescence to gain the worldly experience so prized by his father. He lived in Newport, went briefly to Harvard Law School, and in 1864 began to contribute both criticism and tales to magazines. In 1869, and then in 1872-74, he paid visits to Europe and began his first novel, Roderick Hudson . Late in 1875 he settled in Paris, where he met Turgenev, Flaubert, and Zola, and wrote The American (1877). In December 1876 he moved to London, where two years later he achieved international fame with Daisy Miller . Other famous works include Washington Square (1880), The Portrait of a Lady (1881), The Princess Casamassima (1886), The Aspern Papers (1888), The Turn of the Screw (1898), and three large novels of the new century, The Wings of the Dove (1902), The Ambassadors (1903) and The Golden Bowl (1904). In 1905 he revisited the United States and wrote The American Scene (1907). During his career he also wrote many works of criticism and travel. Although old and ailing, he threw himself into war work in 1914, and in 1915, a few months before his death, he became a British subject. In 1916 King George V conferred the Order of Merit on him. He died in London in February 1916. David Lodge is the author of twelve novels and a novella, including the Booker Prize finalists Small World and Nice Work . He is also the author of many works of literary criticism, including The Art of Fiction and Consciousness and the Novel .

We accept Mastercard or Visa, PayPal, bank transfer (EU) and checks in USD or GBP. Shipping cost is additional to the book price. If your book order is heavy or large, we may contact you to ask for more money for shipping. Books may be returned for refund if not as described in our catalogue entry.

Seller rating:
This seller has earned a 2 of 5 Stars rating from Biblio customers.
Biblio.com member since 2005
Blockley, Gloucestershire
Ask Seller a Question

We are antiquarian booksellers established in Gloucestershire, England for over twenty years. We have general stock and specialise in early illustrated and children's books and pop-ups. We are members of PBFA.