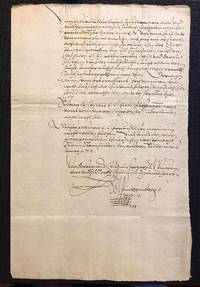 [ST. BARTHOLOMEW'S DAY MASSACRE, 1572]. Autograph Letter Signed, being a contemporary account the St. Bartholomew's Day Massacre when thousands of Protestant Huguenots were slaughtered by Catholics, together with a second document which provides the names of 15 important victims and additional information]

[ST. BARTHOLOMEW'S DAY MASSACRE, 1572]. Autograph Letter Signed, being a contemporary account the St. Bartholomew's Day Massacre when thousands of Protestant Huguenots were slaughtered by Catholics, together with a second document which provides the names of 15 important victims and additional information]

by Ludwig III, Duke of Wurttemberg

inscribed
When a book is described as being inscribed, it indicates that a short note written by the author or a previous owner has...[more]
A.N.
The book is pristine and free of any defects, in the same condition as ...[more]
verso
The page bound on the left side of a book, opposite to the recto page.
fine
A book in fine condition exhibits no flaws. A fine condition book closely approaches As New condition, but may lack the...[more]
folio
A folio usually indicates a large book size of 15" in height or larger when used in the context of a book description....[more]