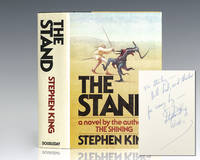 Garden City, NY: Doubleday & Company, 1978. First edition of the author's classic fourth novel. Thick octavo, original half cloth. Association copy, inscribed by the author on the front free endpaper, "For Stanley- With all best, and thanks for coming by - Stephen King 7/17/82." The recipient, Stanley Wiater is a writer and friend of the author. Praised by his friend and colleague Stephen King as "a very talented journalist," Wiater is a widely acclaimed observer of the dark side of popular culture. He has interviewed more major horror and suspense authors, filmmakers, actors, and artists than any other journalist, living or undead, for nearly five decades. He is the author of The Stephen King Universe. Fine (without the usual sag associated with this bulky volume) in a near fine dust jacket. Jacket illustration by John Cayea. An exceptional association. "I love to burn things up," King says. "It's the werewolf in me, I guess.... The Stand was particularly fulfilling, because there I got a chance to scrub the whole human race, and man, it was fun! ... Much of the compulsive, driven feeling I had while I worked on The Stand came from the vicarious thrill of imagining an entire entrenched social order destroyed in one stroke." "There is much to admire in The Stand: the vivid thumbnail sketches with which King populates a whole landscape with dozens of believable characters; the deep sense of nostalgia for things left behind; the way it subverts our sense of reality by showing us a world we find familiar, then flipping it over to reveal the darkness underneath. Anyone who wants to know, or claims to know, the heart of the American experience needs to read this book" (Fiona Webster). It was the basis for the 1994 American television miniseries. King also wrote the teleplay and had a minor role in the series. It was directed by Mick Garris and stars Gary Sinise, Miguel Ferrer, Rob Lowe, Ossie Davis, Ruby Dee, Jamey Sheridan, Laura San Giacomo, Molly Ringwald, Corin Nemec, Adam Storke, Ray Walston, and Matt Frewer.

The Stand is a post-apocalyptic horror/fantasy novel by American author Stephen King. It re-works the scenario in his earlier short story, Night Surf. The novel was originally published in 1978 and was later re-released in 1990 as The Stand: The Complete &amp; Uncut Edition; King restored some text originally cut for brevity, added and revised sections, changed the setting of the story from 1985 to 1990, and updated a few pop culture references accordingly.

jacket
Sometimes used as another term for dust jacket, a protective and often decorative wrapper, usually made of paper which wraps...[more]
octavo
Another of the terms referring to page or book size, octavo refers to a standard printer's sheet folded four times, producing...[more]
First Edition
In book collecting, the first edition is the earliest published form of a book. A book may have more than one first edition in...[more]
Association copy
An association copy is a copy of a book which has been signed and inscribed by the author for a personal friend,...[more]
fine
A book in fine condition exhibits no flaws. A fine condition book closely approaches As New condition, but may lack the...[more]
inscribed
When a book is described as being inscribed, it indicates that a short note written by the author or a previous owner has...[more]