Home Quadrant Book Mart The Story of My Life 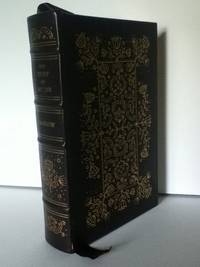 The Story of My Life

The Story of My Life

Birmingham, AL: The Legal Classics Library, 1988. Hardcover. Near Fine-/None. Privately printed, this edition number 13234, from the library of Joseph P. Galda, according to an adhesive bookplate laid in. Full brown leather, gilt-decorated and embossed, with 4 raised bands and marbled endpapers. All edges gilt. Edgeworn spot at bottom front spine and four corners of spine. Brown satin ribbon intact. Binding is sound and interior unmarked. Smaller 8vo. BOOK INFO: Clarence Seward Darrow (1857-1938) was an American lawyer, leading member of the American Civil Liberties Union, and prominent advocate for Georgist economic reform. He was known for defending some high-profile cases, including the McNamara brothers; the American Federation of Labor had called on Darrow to represent them, but as the jury was being seated, Darrow was accused of bribery. Darrow arranged a plea bargain, which spared the brothers from the death penalty, but many in organized labor felt he sold out the movement. Considered a 'sophisticated country lawyer', Darrow remains notable for his wit; he was quoted as saying, 'The trouble with law is lawyers.' Here, his autobiography, together with the additional 59-pg. Darrow's Plea, written in his own defense to the jury that exonerated him of the charge of bribery at Los Angeles, August, 1912. Includes index. Joseph P. Galda; American Federation of Labor; AFL; American Civil Liberties Union; ACLU; Georgist economic reform; McNamara brothers; Leopold and Loeb; Ossian Sweet; John T. Scopes; Scopes Monkey Trial; William Jennings Bryan

Re: Shipping--We may need to ask more for shipping for overweight, (including multiple book sales) or large-dimension books. If the actual shipping cost is more than our listed/default rate, we will contact you with the amount and give you the opportunity to accept. For expedited or international shipping rates, we will provide an accurate price quote after the order is placed; This rate will likely vary from our listed/default rate. At this point, the customer may accept or decline the charges. In other words, our shipping rates for international zones are estimates only.

We offer a 30 day return guarantee, with full refund of the paid book price for up to 30 days after delivery if an item arrives misdescribed or damaged.

Seller rating:
This seller has earned a 5 of 5 Stars rating from Biblio customers.
Biblio.com member since 2016
Easton, Pennsylvania
Ask Seller a Question

The Quadrant Book Mart and Coffee House stocks more than 50,000 carefully-chosen collectible, rare and out-of-print volumes—as well as reading copies—for a broad range of reader interests, including art, architecture, modern firsts, literary criticism, and regional, American and world history. For more than 20 years, proprietors Andris Danielsons and Joanne Moranville have prided themselves on offering titles that are fairly priced and meticulously evaluated for condition. Our brick-and-mortar location stands at the heart of the arts and cultural community of historic downtown Easton, Pa., where we welcome neighbors and new friends to peruse the stacks of books shelved in two stories and lining the dining room of our top-rated coffee house.

spine
The outer portion of a book which covers the actual binding. The spine usually faces outward when a book is placed on a shelf.... [More]
raised band(s)
Raised bands refer to the ridges that protrude slightly from the spine on leather bound books.  The bands are created... [More]
gilt
The decorative application of gold or gold coloring to a portion of a book on the spine, edges of the text block, or an inlay in... [More]
edges
The collective of the top, fore and bottom edges of the text block of the book, being that part of the edges of the pages of a... [More]
bookplate
Highly sought after by some collectors, a book plate is an inscribed or decorative device that identifies the owner, or former... [More]