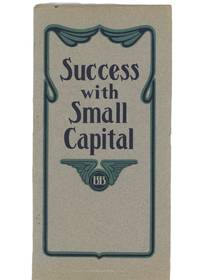 New York: Butler Brothers, 1901. Wraps. Very good. George and Edward Butler founded the wholesale mail order company Butler Brothers in Boston in 1877 and opened a Chicago warehouse in 1879. The company focused on providing inexpensive staple goods to independent general stores and supported their growth. This pamphlet provides entrepreneurs the road map for starting their own department store, covering everything from location and naming the store, to setting up of displays, profit margins, and stocking the store with products offered by Butler Brothers. "The reason why a man with a small stock of variety goods can hold his own against concerns that have dollars, where he has dimes, is simple," the brochure states. "Every penny of capital is in quick turning goods."

Butler Brothers ultimately moved all operations to Chicago by 1930. "Like Sears and Montgomery Ward, other Chicago companies that had large mail-order operations, Butler Bros. moved into brick-and-mortar retailing during the 1920s. By the beginning of the 1930s, it operated over 100 of its own "Scott" and "L. C. Burr" stores; at the same time, it had begun a franchising business that allowed independent retailers to become members of the "Ben Franklin" and "Federated" chains, which were supplied by Butler Bros. By 1936, there were about 2,600 Ben Franklin stores and 1,400 Federated stores around the country, mostly in small towns. During the 1940s and 1950s, Butler Bros. approached $120 million a year in wholesale and retail sales, ranking it among the leading wholesalers in the United States. In 1960, after it sold Ben Franklin and its other retail operations to the City Products Corp. of Ohio (which was bought in 1965 by the Household Finance Corp. of Chicago), Butler Bros. faded away" (Encyclopedia of Chicago).

Tall octavo: 52 p. with black-and-white illustrations. Original printed paper wrappers, bound with three staples. Some light edgewear to the wrappers, with a bit of rust to the staples; else very good. Scarce, OCLC locates no holdings.

As proud members of the Antiquarian Booksellers' Association of America, we uphold our association's code of ethics. If you are not satisfied with your purchase, all items are returnable within ten days of delivery. Materials must be returned in the same condition as sent. If you have any questions or concerns, simply call us to discuss.

Seller rating:
This seller has earned a 5 of 5 Stars rating from Biblio customers.
Biblio.com member since 2008
Covina, California
Ask Seller a Question

Established in 1981, johnson rare books & archives is located in the heart of downtown Covina, about 20 miles east of Los Angeles. Our shop is currently open by appointment Thursday - Saturday from 11am - 6pm (please call ahead) and houses an inventory of some 30,000 titles, ranging from the general second-hand to the truly antiquarian. For more information, visit our website at www.johnsonrarebooks.com or call 1-626-967-1888.

wrappers
The paper covering on the outside of a paperback. Also see the entry for pictorial wraps, color illustrated coverings for... [More]