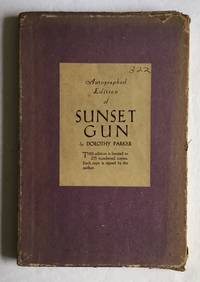 New York: Boni & Liveright, 1928. Hardcover, purple paper, white cloth spine, slipcase but missing glassine. Very Good in Good slipcase/No Jacket. Signed, limited edition in slipcase, presentation copy. Purple paper is faded, and there are some small ink (?) spots on back cover, as well as a small smudge on the bottom corner of the limitation page. SIGNED limitation page with 'Dorothy Parker' in blue ink, states ‘this edition limited to 275 copies, of which 250 are for sale.’ This copy is numbered in the same blue ink as 322, and the word ‘Presentation’ in black ink follows. 75 pages, many unopened, printed on Boni & Liveright watermarked paper. Slipcase worn and faded, all edges rubbed, splitting at top and bottom. Label affixed to slipcase states ‘Autographed Edition. This edition is limited to 275 numbered copies. Each copy is signed by the author.’ At the upper right corner is the number 322 in ink, mirroring the number on the limitation page of the volume. From the family of T. R. Smith, who was chief editor and adviser at Liveright in the 1920s. Although not indicated, this is assumed to be Smith’s personal presentation copy from Parker, with the numbering extending beyond the official count. Boni & Liveright had also published Parker’s first collection of verse, Enough Rope, in 1926, which was a best-seller full of her light verse and savage wit; Smith was responsible for Enough Rope, as well as other prominent works. This is Parker’s second volume of verse, collected from poetry originally printed in the New Republic, New Yorker, Nation, Life, and other periodicals of the day. Many are her best-known works of love, bitterness, and betrayal, and contain her signature sardonic wit. Parker’s verse was her ‘most transparently autobiographical form of expression,’ and according to one biographer, ‘Taken together, all of her poems amounted to a kind of diary of shifting moods, most of them ranging from black to blue.’ Sunset Gun was published in May 1928, soon after her divorce from Eddie Parker was finalized and shortly before an appendicitis landed her in the hospital. Liveright printed a large first run of 10,000 as well as the limited edition of 250, which sold for $7.50. The title was changed from Songs for the Nearest Harmonica to the darker-sounding Sunset Gun, which refers to the cannon fired at the end of the day while the flag is lowered. The volume is dedicated to Ivy League playboy John Garrett, her love affair at the time. Dorothy Rothschild Parker, 1893-1977, was an American poet, short story writer, critic and satirist, known for her cutting wisecracks. She was a founding member of the Algonquin Round Table, an early contributor to the New Yorker magazine, and worked as a screenwriter in Hollywood for many years.

Review this book and you‚Äôll be entered for a chance to win !

Monkey House Books is a mail order, used book dealer located on New York's Long Island. We offer quality used books in a variety of categories at reasonable prices. A home-based business managed by a lifelong bibliophile, Monkey House offers personalized assistance and friendly customer service. For the holidays, or anytime, we provide gift wrapping and recipient shipping upon request. We ship within 24 hours of receiving payment, and packages are wrapped and boxed using recycled/reused materials.

Cloth
"Cloth-bound" generally refers to a hardcover book with cloth covering the outside of the book covers. The cloth is stretched... [More]
spine
The outer portion of a book which covers the actual binding. The spine usually faces outward when a book is placed on a shelf.... [More]
unopened
A state in which all or some of the pages of a book have not been separated from the adjacent pages, caused by a traditional... [More]
edges
The collective of the top, fore and bottom edges of the text block of the book, being that part of the edges of the pages of a... [More]
jacket
Sometimes used as another term for dust jacket, a protective and often decorative wrapper, usually made of paper which wraps... [More]