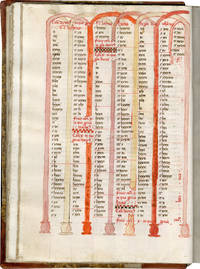 Super unum ex quattuor seu Concordia evangelistarum (Commentary on One from Four or the Agreement of the Evangelists), Compendium historiae in genealogia christi (A Compendium of History in the Genealogy of Christ); excerpt from JOSEPHUS, Antiquitates iudaice (Jewish Antiquities); illustrated Latin manuscript on paper and parchment

Super unum ex quattuor seu Concordia evangelistarum (Commentary on One from Four or the Agreement of the Evangelists), Compendium historiae in genealogia christi (A Compendium of History in the Genealogy of Christ); excerpt from JOSEPHUS, Antiquitates iudaice (Jewish Antiquities); illustrated Latin manuscript on paper and parchment

by ZACHARIAS CHRYSOPOLITANUS, PETER OF POITIERS

FINELY ILLUSTRATED MEDIEVAL MANUSCRIPT ON PAPER AND PARCHMENT. In Latin, illustrated manuscript on paper, Southern Netherlands (Sluis, near Bruges), dated 1475. Dimensions 295 x 210 mm., 244 folios, complete, horizontal catchwords, prickings visible, written in cursive gothic bookhands by several scribes, 1- to 3-line initials, 3-line initials, a few red initials with black penwork, usually 2- to 3-line, SMALL DIAGRAM of the four seasons and four cardinal directions, three folios with FULL PAGE CANON TABLES, FIVE DRAWINGS in black ink, LARGE DIAGRAM on f. 242. BINDING: 19th-century half leather and marbled pasteboard. TEXT: The two 12th-century texts, both of fundamental importance for the history of medieval biblical exegesis, are adapted here for Franciscan use in the fifteenth century; special features include a table of Gospel lections for the Mass and the drawings illustrating the biblical genealogy. PROVENANCE: signed and dated by the scribe, brother Franciscus Guilhelmus, in 1475; it is the only known surviving volume from the library of the Observant Franciscans at Sluis (near Bruges); includes a marginal apparatus with cross references by the original scribe, with additional notes in a second hand; contemporary or slightly later note on f. 243v, ending with three words, presumably of a name, erased and made illegible, plus a pen- flourish signature also undecipherable; presumably still at Sluis in the first half of the 16th century when a visiting friar, Paulus Zelandus from Hulst, added a note in a lower margin; probably entered private hands during the dispersal of the monastery's goods in the 17th century; private European collection. CONDITION: parchment is of varying quality, some of it remarkably poor, some small smudges throughout, first leaf creased with frayed edges and holes in the outer margin, but overall in excellent condition. Full description and images available. (TM 1012)

Poor
A book with significant wear and faults. A poor condition book is still a reading copy with the full text still readable. Any...[more]
edges
The collective of the top, fore and bottom edges of the text block of the book, being that part of the edges of the pages of a...[more]
Parchment
Pages or book covering made from a prepared animal skin. Parchment describes any animal skin used for books, while vellum is a...[more]