Home The Lawbook Exchange Ltd System of Stiles as Now Practicable Within the Kingdom of Scotland.. 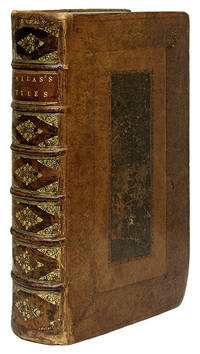 System of Stiles as Now Practicable Within the Kingdom of Scotland..

System of Stiles as Now Practicable Within the Kingdom of Scotland..

1697. The First Scottish Book of Precedents Dallas, George [1635-1701]. System of Stiles, As Now Practicable Within the Kingdom of Scotland: And Reduced to a Clear Method, Not Heretofore. Consisting of VI. Parts. I. Real and Personal Diligence. II. What Passeth the Privy-Seal Only. III. Summonds Passing the Signet. IV. What Letters Pass the Signet, and Such Precepts in Latine as Upon signatures Pass Also the Signet and Whole Seals, Except the Quarter-Seal; And What Passes the Great-Seal per Saltum. V. All Securities, Contracts of Marriage, Tailzies, Mortifications, Life-Rentrights, Provisions of Younger-Children, Excambions, and the Like. VI. Services, Tutories, Summonds of Error, and Others. Edinburgh: Printed by the Heirs and Successors of Andrew Anderson, 1697. [iv], 52, 63-89, [1], 89-185, [1], 185-393, [1], 393-669, 700-717, [1], 689-693, [1], 693-863, [1], 863-904, [12] pp. Pagination irregular, text complete. Folio (11-1/2" x 7"). Contemporary paneled calf, gilt spine with lettering piece and raised bands, recent repairs to spine ends, speckled edges. Light rubbing and a few minor scuffs to boards, moderate rubbing to extremities, spine ends bumped and lightly worn, hinges cracked, armorial book plate of James Stuart, 2nd Earl of Bute, above a contemporary manuscript shelf location number to front pastedown. Light toning to text, somewhat heavier in places, light soiling to title page and a few other leaves. An attractive copy. $350. * First edition. This was the first Scottish book of precedents, or, to use the Scots term, Styles. According to Walker, System of Stiles was "long indispensable in Scottish legal offices." A second edition in two volumes was published in 1774. Stuart, 2nd Earl of Bute [1696-1723] was the father of John Stuart, 3rd Earl of Bute, the advisor to King George III who was Prime Minister from 1762 to 1763. Walker, Oxford Companion to Law 330. English Short-Title Catalogue R468989.

First Edition
In book collecting, the first edition is the earliest published form of a book. A book may have more than one first edition in... [More]
calf
Calf or calf hide is a common form of leather binding.  Calf binding is naturally a light brown but there are ways to treat... [More]
rubbing
Abrasion or wear to the surface. Usually used in reference to a book's boards or dust-jacket.
plate
Full page illustration or photograph. Plates are printed separately from the text of the book, and bound in at production. I.e.,... [More]
gilt
The decorative application of gold or gold coloring to a portion of a book on the spine, edges of the text block, or an inlay in... [More]
leaves
Very generally, "leaves" refers to the pages of a book, as in the common phrase, "loose-leaf pages." A leaf is a single sheet... [More]
spine
The outer portion of a book which covers the actual binding. The spine usually faces outward when a book is placed on a shelf.... [More]
title page
A page at the front of a book which may contain the title of the book, any subtitles, the authors, contributors, editors, the... [More]
cracked
In reference to a hinge or a book's binding, means that the glue which holds the opposing leaves has allowed them to separate,... [More]
edges
The collective of the top, fore and bottom edges of the text block of the book, being that part of the edges of the pages of a... [More]
folio
A folio usually indicates a large book size of 15" in height or larger when used in the context of a book description.... [More]
raised band(s)
Raised bands refer to the ridges that protrude slightly from the spine on leather bound books.  The bands are created... [More]