Home Textbooks THE TALE OF THE UNKNOWN ISLAND (SIGNED) 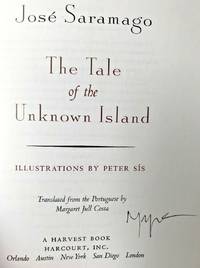 THE TALE OF THE UNKNOWN ISLAND (SIGNED)

THE TALE OF THE UNKNOWN ISLAND (SIGNED)

SOFTCOVER. SIGNED in Person at the Book Signing Event. THE TALE OF THE UNKNOWN ISLAND by José Saramago (November 16, 1922, to June 18, 2010). Translated from the Portuguese and SIGNED by Margaret Jull Costa. Illustrations by Peter Sís. SIGNED to the Full Title page by Margaret Jull Costa, the translator. Brand New and Never owned. This is a First Edition, Second Printing copy as stated on the copyright page. The book is in Brand New condition with no issues. Book has no tears, marks, creases, remainder marks, library markings, or black lines on the edges. Not inscribed to anyone. Not price-clipped, not a Book Club Edition (BCE), or signed on a bookplate. True Collectible Quality. First Edition, Second Printing, hand SIGNED to the Full Title page. No inscription; full signature only. From an event featuring Margaret Jill Costa and Ana Luísa Amaral in conversation with Susan Bernofsky at Columbia University in New York City on April 11, 2019. This book will be carefully wrapped and shipped with free delivery confirmation. **** José Saramago was one of the most acclaimed writers of the twentieth century. In 1998 he was awarded the Nobel Prize for Literature. A few of his great novels: Baltasar and Blimunda, Blindness, The Gospel According to Jesus Christ, Death with Interruptions, and The Cave. Margaret Jull Costa has been a literary translator for over thirty years. She is a three-time winner of the Oxford-Weidenfeld Translation Prize among many other awards. She has translated works by Rafael Chirbes, Javier Marías, Fernando Pessoa, Ana Luísa Amaral, Eça de Queirós, Enrique Vila-Matas, and the Nobel-prize winning José Saramago. The Tale of the Unknown Island was published as a Harvest book on October 5, 2000. ISBN: 978-0156-0130-31. BS13619.

edges
The collective of the top, fore and bottom edges of the text block of the book, being that part of the edges of the pages of a...[more]
bookplate
Highly sought after by some collectors, a book plate is an inscribed or decorative device that identifies the owner, or former...[more]
New
A new book is a book previously not circulated to a buyer. Although a new book is typically free of any faults or defects,...[more]
title page
A page at the front of a book which may contain the title of the book, any subtitles, the authors, contributors, editors, the...[more]
inscribed
When a book is described as being inscribed, it indicates that a short note written by the author or a previous owner has...[more]
remainder
Book(s) which are sold at a very deep discount to alleviate publisher overstock. Often, though not always, they have a remainder...[more]
book club edition
A generic term denoting a book which was produced or distributed by one of any number of book club organizations. Usually the...[more]
Copyright page
The page in a book that describes the lineage of that book, typically including the book's author, publisher, date of...[more]
First Edition
In book collecting, the first edition is the earliest published form of a book. A book may have more than one first edition in...[more]