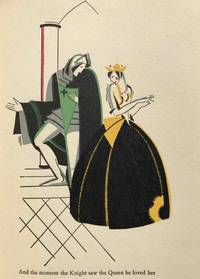 London: George G. Harrap & Co. Ltd, 1929. First Edition. Phyllis A. Trery.. First edition, limited to two hunderd copies only. The author has taken the dramatic works of Bernard Shaw and retold them in a jungle context, replacing Shaw's human characters with animals: an endearing and somewhat eccentric book, brilliantly illustrated in art deco style and hand-coloured in pochoir by Phyllis A. Trery. 'In the jangle and jungle of life you must kill or be killed, you must eat or be eaten, you must trap or be trapped. The great Rhino knew it-had always known it, had prepared for it, had grown a lovely thick skin for it, and long, thick tusks for it. And he hewed his was through the jungle and nothing could stop him and he stopped at nothing-and-ugh ! - he was always there, grabbing and getting, spreading and swelling, overtaking, overpowering, overwhelming; nothing could stop him. But even a Rhino has his soft side, and his soft side made him up one day to look for a mate. Being the Rhino that he was, only the best would satisfy him. Spying a beautiful and haughty Peacock strutting about in her proud way in the dazzling sunshine, he made up his mind. "I'll have her," he said to himself ; and went after her and won her and she bore him three offsprings, two she-males and a he, and their names were Barbara, Sarah, and Stephen. Barbara was a Honey-bee, Sarah a Salamander, and Stephen a Mule. (Imagine it !)'. Small quarto, bound in original gilt-decorated quarter vellum, top edge gilt, 216 pages, 15 full page colour illustrations, small closed tear to back board, a very good copy.

G
Good describes the average used and worn book that has all pages or leaves present. Any defects must be noted. (as defined...[more]
top edge gilt
Top edge gilt refers to the practice of applying gold or a gold-like finish to the top of the text block (the edges the...[more]
vellum
Vellum is a sheet of specialty prepared skin of lamb, calf, or goat kid used for binding a book or for printing and writing. ...[more]
First Edition
In book collecting, the first edition is the earliest published form of a book. A book may have more than one first edition in...[more]
quarto
The term quarto is used to describe a page or book size. A printed sheet is made with four pages of text on each side, and the...[more]