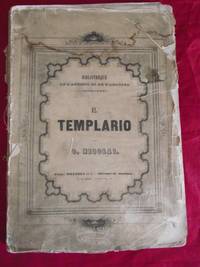 There is a faint ink stamped Brandus et Dufour on title page, from 1854.

There are 3 embossed stamps of Duncan Davison and Co. The office of the Musical World. 244 Regent Street, where he worked1863 to 1885.

Il templario is an Italian-language opera by the German composer Otto Nicolai from a libretto written by Girolamo Maria Marini based on Walter Scott's Ivanhoe.

Il templario received its premiere performances at the Teatro Regio, Turin in 1840, and continued on a successful run through Italy, rivaling Pacini's Saffo. However, it disappeared for over 160 years until it was reconstructed in 2006 and performed in 2008.

Front cover is yellowed, chipped in places, water stained, and detached. front title page has a `1` written at the top. The block is loose in 2 or 3 places. The back cover has some chips.

Seller rating:
This seller has earned a 5 of 5 Stars rating from Biblio customers.
Biblio.com member since 2016
Liverpool, Merseyside
Ask Seller a Question

MyTomes sells books of a collectable nature, with a specialisation in music.

G
Good describes the average used and worn book that has all pages or leaves present. Any defects must be noted. (as defined... [More]
plate
Full page illustration or photograph. Plates are printed separately from the text of the book, and bound in at production. I.e.,... [More]
First Edition
In book collecting, the first edition is the earliest published form of a book. A book may have more than one first edition in... [More]
title page
A page at the front of a book which may contain the title of the book, any subtitles, the authors, contributors, editors, the... [More]