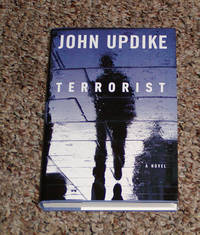 New York City, NY: Alfred A. Knopf, 2006. First Edition. First Printing.. Hardcover. As New/As New Dust Jacket.. New York City, NY: Alfred A. Knopf, 2006. Hardcover. As New/As New. First Edition/First Printing. 310 pages. The author's 22nd novel. Now considered a contemporary classic. The First Hardcover Edition. Precedes and should not be confused with all other subsequent editions. Published in a small and limited first print run as a hardcover original only that sold out shortly after publication. Subsequent printings do not have the topstain that has become a trademark of Updike's handsomely produced books. The First Edition is now scarce. Presents John Updike's "Terrorist". Ostensibly Updike's exploration of spirituality, religion, and fanaticism. Themes he explored in such novels as "The Coup" and "Toward The End of Time". Updike's genuine achievement is his protagonist, Ahmad Ashmawy Mulloy, the 18-year-old American suicide bomber/son of a present Irish mother and an absent Egyptian father. "He's my hero. I tried to understand him and to dramatize his world. Besides it's not just young Muslims who are killing themselves. We have all these American high school students, steeped in Protestantism and Judaism, who bring guns to school to shoot up the cafeteria knowing they're going to die at the end of this rush" (John Updike). "Tells his story with the thrilling, gorgeous prose we have come to expect of him. A terrible beauty" (Alden Mudge). Written in Updike's characteristic lapidary style: Chiseled, polished, impeccable. There is such a thing as a John Updike line or sentence in the sense that there isn't in any other living American writer. Susan Sontag regarded him as the finest stylist in the English language of our time. The novel provided a compelling reason for John Updike to emerge from the seclusion of his Beverly Farms, Massachusetts home and embark on his first (and final) national book tour in a very long time. John Updike died of lung cancer on January 27, 2009 at the age of 76. He leaves behind a very large body of work, but will still be missed. An absolute "must-have" title for John Updike collectors. <B><i>This title is a contemporary classic. This is one of few copies of the First Hardcover Edition/First Printing still available online and is in especially fine condition: Clean, crisp, and bright, a pristine beauty. Please note: Copies available online have serious flaws, are subsequent printings, or are remainder-marked. This is surely an accessible and lovely alternative. A scarce copy thus. </b></i> A writer all his adult life, John Updike was probably the most-honored American writer of our time: Winner of numerous awards, among them the Guggenheim Fellowship (1959), Rosenthal Award, National Institute of Arts and Letters (1959), National Book Award for Fiction (1964), O. Henry Prize (1967-68), American Book Award (1982), National Book Critics Circle Award for Fiction (1982, 1990), Union League Club Abraham Lincoln Award (1982), National Arts Club Medal of Honor (1984), and the National Medal of the Arts (1989), the highest award the U. S. Government bestows on its artists and writers. In 1976, he became a member of American Academy of Arts and Letters. In 2003, Updike received the National Medal for Humanities, joining a very small group of great living Americans who have been honored with both the National Medal of the Arts and the National Medal for the Humanities. Updike's greatest novels, "Rabbit is Rich" and "Rabbit at Rest", won Pulitzer Prizes. One of the greatest American writers of the 20th century. A fine copy. (SEE ALSO OTHER JOHN UPDIKE TITLES IN OUR CATALOG). ISBN 0307264653.

John Updike has written a brilliant novel that ranks among the most provocative of his distinguished career. Terrorist is the story of Ahmad Ashmawy Mulloy, an alienated American-born teenager who spurns the materialistic, hedonistic life he witnesses in the slumping New Jersey factory town he calls home. Turning to the words of the Holy Qur'an as expounded to him by the pedantic imam of a local mosque, Ahmad devotes himself fervently to God. Neither the world-weary guidance counselor at his high school nor Ahmad's mischievously seductive classmate Joryleen succeeds in deflecting him from his course, as the threads of an insidious plot gather around him."One compelling and surprising ride."--USA Today"The startlingly contemporary story of a high school student . . . whose zealous Islamic faith and disaffection with modern life make him a pawn in the larger conflict between Muslim and Christian, East and West. They also make him a powerful voice for Updike's ongoing critique of American civilization."--Time"A chilling tale that is perhaps the most essential novel to emerge from Sept. 11."--People (Critic's Choice)From the Trade Paperback edition.

First Edition
In book collecting, the first edition is the earliest published form of a book. A book may have more than one first edition in...[more]
leaves
Very generally, "leaves" refers to the pages of a book, as in the common phrase, "loose-leaf pages." A leaf is a single sheet...[more]
crisp
A term often used to indicate a book's new-like condition. Indicates that the hinges are not loosened. A book described as crisp...[more]
fine
A book in fine condition exhibits no flaws. A fine condition book closely approaches As New condition, but may lack the...[more]
jacket
Sometimes used as another term for dust jacket, a protective and often decorative wrapper, usually made of paper which wraps...[more]