Home Garrett Scott, Bookseller (ABAA) Testimony Presented to the Presbytery of Michigan, in Support of the Protest of C. Nicoll. 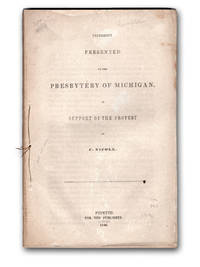 Testimony Presented to the Presbytery of Michigan, in Support of the Protest of C. Nicoll.

Testimony Presented to the Presbytery of Michigan, in Support of the Protest of C. Nicoll.

[Detroit? Pontiac?]: Printed for the Publisher, 1846. First edition.. Stitching partially perished, but sheets still holding; some browning to the fore-edges of the text block, a little dust-soiling; a very good copy.. Unbound pamphlet, stitched as issued, 8.25 x 5.25 inches, 148 pages. And here I must record that Mr. Allen had good reason to suppose me drunk or insane; in the house of Mr. Field, I have him either $55 or $65, for which I took his note; I have him an order for near $40 on H. C. Knight, and the half was to be given to help to build an Old School church. . . . Mr. Allen, knowing his own character, drew the conclusion justly, that if I had been sober I would never have trusted him with a hundred dollars." A lively and at times mordantly humorous defense by the Rev. Nicoll against charges of drunkenness, charging a conspiracy at the hands of the Rev. Lemuel Bates working through the cat's paw of James S. Allen (himself supposedly in thrall to Mrs. Bates and doing her bidding); Nicoll had challenged Bates's fitness to admission to the Presbytery of Michigan, suggesting in part "common fame says that he [Bates] continues his old practices of lounging about stores, visiting their cellars to look at their vinegar, but really to drink their liquors; continues to be the as regardless of truth as ever--witness his speech on his overture, and many other things. It is said that he has been seen drunk in the streets of Detroit, and in the streets of Pontiac, in less than a year." Questions of procedure, allegations against the chastity of Mrs. Bates, comparison to a nest of rattlesnakes, etc. etc., all suggest that ecclesiastical polity of early Michigan possessed of a vigor and engagement rarely seen today. Not noted in the American Imprints (Michigan) survey; the scattered holdings on OCLC all generally suggest a Michigan imprint, and though the length of this piece seems possible from a Pontiac press, it seems more likely that Nicoll had it printed up in Detroit.

All items guaranteed as described. All items subject to prior sale. All items may be returned within 30 days for any reason in the condition in which they were sent (unless damaged in shipment) though we ask the courtesy of prior notification. Institutional customers may ask for deferred billing; we will happily hold material for institutions until they can take shipment. Please inquire.

Seller rating:
This seller has earned a 5 of 5 Stars rating from Biblio customers.
Biblio.com member since: 2006
Ann Arbor, Michigan
Ask Seller a Question

Unbound
A book or pamphlet which does not have a covering binding, sometimes by original design, sometimes used to describe a book in...[more]
First Edition
In book collecting, the first edition is the earliest published form of a book. A book may have more than one first edition in...[more]
text block
Most simply the inside pages of a book.  More precisely, the block of paper formed by the cut and stacked pages of a...[more]