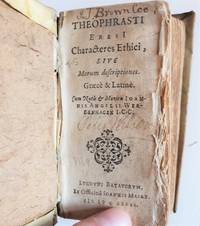 Peter Wilson (1746–1825) was born in Ordiquhill, Banffshire, Scotland, and studied at the University of Aberdeen. After moving to New York City in 1763, he worked as a teacher and then as principal of the Hackensack Academy before becoming professor of Greek and Latin at Columbia College 1789–92 and 1797–1820. During the latter stint he was also professor of Grecian and Roman antiquities. Wilson's service at Columbia was interrupted by a principalship at Erasmus Hall Academy in Flatbush, New York. Peter Wilson represented Bergen County in the New Jersey General Assembly, 1778–1781 and 1787. In 1783 he helped prepare a revision and codification of the laws of New Jersey. Dr. Wilson also wrote textbooks and edited classical works (DAB; Ward W. Briggs Jr., ed., Biographical Dictionary of North American Classicists [1994], 715–6; NjHi: Wilson Papers; Milton Halsey Thomas, Columbia University Officers and Alumni 1754–1857 [1936], 92; Historical Catalogue of Brown University, Providence, Rhode Island, 1764–1894 [1895], 334; John P. Dullard, comp., Manual of the Legislature of New Jersey [1921], 175; Willis Boughton and Eugene W. Harter, Chronicles of Erasmus Hall [1906], 52–4; Boston Columbian Centinel, 6 Aug. 1825). (Source: National Archives.)

vellum
Vellum is a sheet of specialty prepared skin of lamb, calf, or goat kid used for binding a book or for printing and writing. ... [More]
title page
A page at the front of a book which may contain the title of the book, any subtitles, the authors, contributors, editors, the... [More]
errata
Errata: aka Errata Slip A piece of paper either laid in to the book correcting errors found in the printed text after being... [More]
New
A new book is a book previously not circulated to a buyer. Although a new book is typically free of any faults or defects, "new"... [More]
verso
The page bound on the left side of a book, opposite to the recto page.