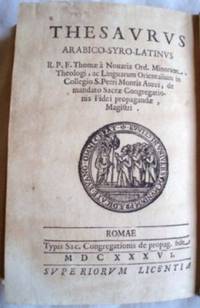 FIRST EDITION of the Syriac-Arabic dictionary arranged according to subjects originally compiled in the 11th century by Elias bar Shinaya, Metropolitan of Nisibis, edited with a Latin translation by Obicini. It was published by Obicini's pupil Germanus de Silesia, author of an Arabic Grammar and an Italian-Arabic dictionary. It is dedicated by Achilles Venerius to Cardinal Barbarini. The Syriac types are the 20pt Maronite types and the Arabic of the text Granjon's arabe du kitãb al-Bustãn.

Thomas Obicini (1585-1632) from Novara, was abbot of the Franciscan convent at Aleppo. In 1621 he returned to Rome and became first lector of Arabic in the St Peter Convent. He was responsible for the supervision of the type designs of Oriental types at the Propaganda Press. The author warns the reader against irregularities in the text, owing to the difficulties in printing Arabic texts, and the new type. The Propaganda Press was founded in 1622 and in 1626 a true printing house was established together with a foundry named after the Congregatio. To its stock were added exotic types from the Stamperia Vaticana. The Press printed missals, grammars, dictionaries and Alphabeta.

device
Especially for older books, a printer's device refers to an identifying mark, also sometimes called a printer's mark, on the...[more]
New
A new book is a book previously not circulated to a buyer. Although a new book is typically free of any faults or defects,...[more]